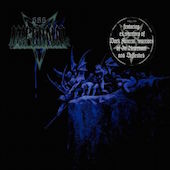 Type: EP
Release Date: 1999
Label: Hellspawn Records
Genre: Black, Death
1 Requiem (The Coming Of The Age Of Satan)
2 Wrath Of The Infernal One
3 Storms Of Armageddon
4 Under The Hellsign

Infernal were a great promise at the end of the last millennium. There was just one tiny little problem. This promise was never kept. Instead of producing a proper discography, the releases became more and more sparse and it all ended with the suicide of David Parland. Thus, the EP presented here remained the most voluminous work of the band, although it also has only four songs to show. Parland and his quite prominent comrades-in-arms like Matte Modin (Dark Funeral, Defleshed and more) celebrate over 16 minutes of typical Swedish metal of the blackest variety. The name of the band describes the aura of the EP perfectly, the tempo is constantly high and the voice knows only one pitch, namely the roughest possible. However, excessive distortion is avoided and keyboards are also not used. Thus, Infernal has a very generic-metallic approach and that is likeable.

The dense production avoids sonic unevenness. It supports the musical frontal attack in the best possible way. If you compare this production with Dark Funeral's first EP, you will find more sharpness, more aggression and more hostility towards everything and everyone. To highlight a single song makes little sense, as they are all cut from the same cloth. The effectively integrated tempo changes (from very fast to ultra-fast and back) give the material a dynamic outfit, the guitars strike exclusively black-metal tones and the solos also contain an appropriate portion of rebellion and resistance. All in all, the cover, the music and the lyrics form a successful unit and only the band's own style description "Satanic Holocaust Metal" gets on my nerves because of its stupidity. But please, some clever marketing expert must have gone wild.

It’s sad that such a competent musician committed suicide, but it seems that too many demons had taken control of David Parland. However, this EP is one of the best pieces of his musical legacy. Hopefully, he has found a peaceful place in hell or anywhere else. I would not be surprised if he and Jon Nödtveidt can confirm the old finding of Bon Scott: Hell ain’t a bad place to be.