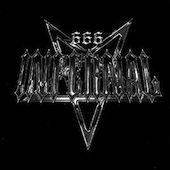 Many Swedish apostles of hell have been involved in Infernal, but Blackmoon was the managing director until his death in 2013. Unfortunately, Infernal were not able to leave us a large inheritance. But the few songs that they released did not shy away from comparison with the tracks of comparable bands. It is therefore a pity that Summon Forth the Beast offers only two previously unreleased electric shocks, while the remaining tracks are cover versions, inter alia Von's "Satanic Devil Pig". I know that this group is very controversial and the here presented track gives an idea why some people hate it. The delicately titled piece embodies pure primitiveness. It shocks with its inexorable straightness without forgetting the absolute minimum of variety. Apart from that, the song surprises with an explosive and efficient chorus. Hellish and embittered at the same time, the track matches the general approach of Infernal excellently.

Infernal's own compositions at the beginning of the album are even better. They shine with a higher portion of creativity, but this is not the crucial thing. Of greater relevance is that they possess this specific kind of precision and coldness which makes meticulously crafted Swedish death / black metal to a very special experience. The atmosphere is comparable with that of the most intensive moments of Necrophobic, while the music is even more thunderous. Blackmoon and his henchmen celebrate the fascinating combination of musicianship and aggression in a highly motivated manner. Both tunes are intelligently structured with the effect that they do not lack clarity and sharpness. Due to these circumstances, the music reveals its enormous evilness completely. The eye-catching song titles ('Branded by Hellfire' and 'Infernal Holocaust') do definitely not promise too much.

The output is completed by cover versions of Morbid Angel (solidly performed) and Bathory. It goes without saying that each and every track of "Under the Sign of the Black Mark" is worth covering. Yet it is also a matter of course that the original versions of these pieces are sacrosanct. 'Of Doom' was, is and will be eternally brilliant, no matter who has the idea to record it anew. I guess that even the sweet clowns of Nightwish would not be able to ruin this masterpiece. (Perhaps I better think again. Some dimwits are capable of anything.) Anyway, Infernal plays the tune flawlessly, but I cannot detect the signature of Blackmoon. Be that as it may, the five pieces of Summon Forth the Beast form a compact unit that can hardly be beaten. Not least because of the professional, transparent and nefarious sound, the album marks a triumph of "satanic" vileness. Dedicate yourself to this black, sinister and merciless demonstration of vileness. Too bad that Blackmoon (R.I.P.) has left us. Suicide is no solution.