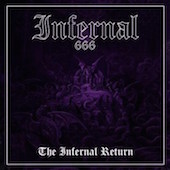 Doubtlessly, The Infernal Return was a correct title, but "The Infernal End" would have been correct as well. It was the last vinyl the band ever published and due to the death of Dave Parland (R.I.P.), we will never see the comeback of the formation. His suicide was the tragic final point of the story of Infernal (666). Once a real band, Parland was the only member left when recording this sonic testament. Only a session drummer supported him.

This 7" is less biting than its very extreme precursors. Nevertheless, the songs dive deeply in the blackest oceans. Parland has never betrayed his followers and therefore the two songs and the intro have much in common with some tunes of Dark Funeral. The all-round artist plays the typical black, typical Swedish melody lines while he barks constantly genre-typical words. Nevertheless, it is surprising to experience that some mid-paced parts are integrated. They do not significantly disturb the - forgive me for using this word now - inferno, but they prevent the evocation of this utterly insane touch that some tracks of the previous outputs have. Although the double bass is permanently in action, the songs are not as intense as, for example, "Branded by Hellfire" from the second EP. Of course, the atmosphere is very dark, and the riffs do not lack excellence, but the final kick is missing. Blast beats do not show up and the guitars are no raging beasts but important tools to create the desired mood. That's okay, but it does not make my pulse race faster.

With respect to this situation, I do not fully understand why the back of the gatefold vinyl speaks of Satanic black death metal. No doubt, formations like Dissection or Necrophobic also do not only focus on absolute velocity and vehemence. Nevertheless, I thought that the creation of red-hot steel was the core competency of the here reviewed group and the eerie intro seems to promise a storm of devastation, but the two songs do not totally fulfil this promise. And this is a pity, because after eight years of silence, I expected a more destructive offering. Moreover, I hoped to get more than only eight minutes of new music. Of course, quality beats quantity, but is this an excuse for this minimalist output? However, maybe I am too rational.

In a nutshell, this is no jewel, but a vinyl with a really strong song on the A and a less furious, partly melodic number on the B side. The slightly dull production does not show grave defects while spreading a pestilent aroma. However, Infernal's end was no reason to cry, because the fragile line-up never scored with eagerness or creativity. The end of Dave Parland has definitely been more tragic.