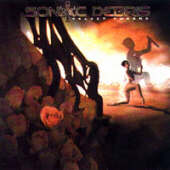 It is good to see a relatively unknown label in DVS Records really starting to make a name for themselves through the progressive fields of metal. Add this impressive debut from Sonic Debris alongside Wolverine and Ashes to Ashes, and DVS Records are compiling an impressive list of extremely competent acts.

Sonic Debris, themselves are influenced by some pretty big names: Faith No More, Dream Theatre, King Crimson, and perhaps a few of the more mellow moments from Smashing Pumpkins. Speaking of which, vocalist Rune Sorheim is clearly influenced by the aforementioned Smashing Pumpkins, in terms of renowned vocals by Billy Corgan.

However, do not be too hasty in judging this band to sound like another carbon copy of Faith No More, Dream Theatre and Smashing Pumpkins, because Sonic Debris have shown with “Velvet Thorns”, that they are way too capable to be just another shadow in the progressive scene.

“Velvet Thorns” makes the transition from harder to melodic to mellow sequences efficiently, but suffers from being a little contrived and maybe too wishy-washy. The members of Sonic Debris all play their instruments well, their song structures are solid, but unfortunately is hard to judge what they were trying to achieve with “Velvet Thorns”, seemingly there are too many musical directions incorporated at once. These guys are good musicians but malign their debut by trying to do much, maybe it was the fact that Sonic Debris have gone 5 years and 3 demos before releasing an actual album and “Velvet Thorns”, was an attempt to include all their signatures in one huge triumphant effort.

My advice to Sonic Debris is to allow the next album to have a more room to breathe and the results may turn into something astounding. That being said, “Velvet Thorns”, despite my harsh criticism is a solid progressive album and well worth a few listens to absorb the interesting directions that Sonic Debris display.

Bottom Line: Even if all the big guns were seemingly fired at once on “Velvet Thorns”, Sonic Debris are a band hard to deny. Possessing some uncanny ability at progressive art and a talent for songwriting, Sonic Debris may be worth looking out for in the future.