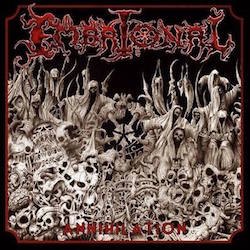 Embrional is one of those bands that I’ve known about for a long time and yet never got around to actually check out to what they have to offer. The time has come and here I go - listening to their 2014 release called Annihilation 2007 + Live, which is their second demo from 2007 released by Polish label Old Temple with addition of 8 live tracks from the 2013 show in Poland’s Bielsko-Biala.  Original demo artwork is a tad different then what we can see over here but it’s updated and all made for the better. There is also a bunch of photographs from live shows included in the booklet and original demo lyrics, making it a full package release for any diehard fan that was missing it in their collections.

First thing that I’ve noticed was the sound of this material. For those of you that remember “demo” days I probably don’t need to explain it much, and as for the rest of you - this is something that you may need to discover on your own. I believe that it is an important part of what was giving most bands their own character and is sadly missing for the most part in the scene nowadays. I am talking about the sound of the band that was created by the band. Not just by instruments they were playing at the time but also equipment they were using and, most important, the sound of their practice room or garage or drummer’s bedroom that was used for practice purposes. Annihilation puts such sound in my speakers and takes me back in time to the era of tape trading and bands recording everything on their own. Embrional recorded the demo themselves, mixed and mastered and all that. Amateurish as it sounds it also shows the passion for the music and will to do anything just to be out there with their material and fulfill their dreams of getting noticed.

Material presented here has a good, original sound that’s quite clear and relatively strong. Most of the songs are fast and punishing, showing lots of promise in departments of arrangement and composition; and lots of fury in the department of everything else.  Six songs bring plenty of speed and relentless attack but there are also quite surprisingly few moments of melodic calm and slow crushing heaviness. There are a few solos that are simply chaotic but very fitting in all the controlled insanity that the band presents. Vocal department is represented well, and considering that this is a demo only, it leaves a lasting impression. All in all, Annihilation is a great material and it is worth checking out by anybody that wishes some brutal death metal punishment on themselves.

Bonus live tracks (eight of them to be exact) are a vicious representation of the band with all the dirt and grime that comes with playing a live show. All the good and the bad are left untouched and for an actual live show recording the quality is rather good. Embrional comes off as high energy and high speed live band, and going through some pictures in the booklet and listening to the performance makes me appreciate the talent that those guys show with even more enthusiasm.

My introduction to Embrional was sonically fulfilling and I cannot believe it took me such a long time to get around to listen to them. They got some full length albums out there and my plan is to check them all out. Annihilation was a good start and I recommend that one to all that don’t know it, as for me - I’m getting their first album into my rotation and you’ll hear from me soon.