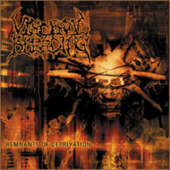 Maintaining a stranglehold/consistency in the world of death metal is certainly a difficult thing to achieve; but implementing a fresh take on the death/grind scene is next to nigh on impossible in light of how many old faces continually rise from old bands in the form of new bands and the new bands out there are always looking for a window to jump through...

Visceral Bleeding would probably fit into the category of ‘buried alive’. Here we have an outfit that many would have presumed extinct or incapacitated, due to an indifferent reaction towards their “Internal Decomposition” demo in 2000. Many folks wrote Visceral Bleeding off and effectively laid these five lads from Sweden to rest, but circa 2002 Visceral Bleeding have risen from the grave and are out to seek fresh fans via “Remnants of Deprivation”.

The song compositions of "Remnants of Deprivation” while not really boasting the trademark ‘guitar solo followed by guitar solo’ death metal element are quite intricate and effectively give Visceral Bleeding a new angel to ply their butchery upon. What I mean by this is that “Remnants of Deprivation”, doesn’t boast the most flashy or skilled players in death world, these guys are competent but don’t deliver standout riff by standout riff or an unbelievable by an unbelievable solo during the course of a song. Instead we are introduced to a world of intelligent tempo changes and therefore there are songs that pique a listener’s interest rather than musical showmanship and gluttony, which frankly we can all do without. Visceral Bleeding follow through the varying nine of songs of "Remnants of Deprivation" with differing guitar breaks and measures, as well as many different takes towards drum work which is a fresh idea considering the absolute monotony often present with this scene. I am getting sick to death of stupidly talented musicians who deliver songs that are so predictable and fatuous. Visceral Bleeding are fortunately not subscribers of this school of thought.

Bottom Line: Visceral Bleeding are not a band who will ever write mind-blowing material, but as far as interesting death metal goes this is about as good as you will get.