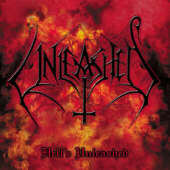 I never thought that I would use those words writing about Unleashed, but I’m not sure if after a 5 year break it would be better for them to come out and release mediocre album or stay away from the scene altogether to be remembered as a cult band from early 90s. I’m sorry to say, but “Hell’s Unleashed” is way below this band’s capabilities and unless they redeem themselves with next release we might have another case of a once great band going straight downhill with fans laughing behind their backs.

Fourteen tracks that clock in at around 43 minutes are so ordinary that I’m not sure this material would’ve made any impact 10 years ago. “Hell’s Unleashed” is straightforward traditional Swedish death metal with mostly mid-tempo songs that build around simple, catchy riffs and overused lyrical subjects.

I won’t even go into the subject of lyrics but “...Rock around the clock, playing hide and seek now, she sure knows how to suck, such a nice little mouth, drives a man insane...” (‘Joy in the Sun’) is not exactly what I’m looking for. I’m mad and extremely disappointed; with a few classic albums under Unleashed’s belt this is below their dignity.