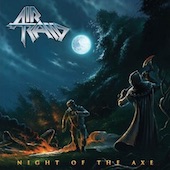 As the year winds down amidst a musical torrent of relatively middle-road releases for me, Sweden once again seems bent on proving to the rest of the metal world that they are producing more than just rehashed black metal and copycat 90's death metal.

The ring has seen its share of traditional metal bands pop up in recent months and, for the most part, they have been very apt at creating a solid case for sanctioned mimicry. That said, Air Raid finally produces its first full-length release after a pretty solid EP in Danger Ahead, itself a full-speed ahead foray into the dusty din of heavy metal antiquity. Try as they might, the younger generation couldn't kill this sound with a book of matches or a stained goblet of gore.

Night of the Axe provides exactly what you think it might: a crunchy blueprint into past architecture that calls upon the likely culprits in Judas Priest and Saxon while standing tall next to modern heavyweights as Steelwing or Spellcaster. The vocals are a throaty rasp that takes full advantage of the clean bellowing that I personally grew up on, and it's done without benefit of overplaying a vocal hand. There are no bells and whistles to overcompensate for a lack of anything; there are even moments where I hear some Warrel Dane tones to Michael Rinakakis' delivery. This is particularly noteworthy in “Dying Man”, which has all of the earmarks of viable heavy metal brashness from any given era.

Lyrically and musically, Air Raid defies the odds and emerges well over the contemporaries when attempting to create music of such an empowering caliber. When I listen to this record for the second time I hear quite a bit of Grave Digger's influential take on fantasy-evoking verses throughout, but the real attention-grabber for me is the guitar solos that take the best that Scott Gorham would have offered had he joined a full-on metal outfit long ago. The riffs are crisp and glorified in all the right spots, adding the right amounts of punch, thickness and credulity to the music as it passes the ear canals with all of the trepidation of a steroid-jacked earwig vying for a safe haven. The fine production that accentuates the guitar tones pretty nicely is great, but I don't hear much bass in the mix which is unfortunate because it would have been a much heavier sound with some back end holding up the foundation, but it's a small gripe.

What I actually found wonderful was the instrumental track “Reminisce”, which literally comes right on the hells of the speedy “Call of the Warlock” and settles all of the swirling dust underfoot in slight, careful wisps of wonder. It's an absolutely inspired place to put it as opposed to the obligatory final track settlement that, while still a great track, might not have had the same emotional resonance it had easing the tempestuousness of the preceding tracks. I dig that sort of careful placement that might otherwise seem throw-away ideas. When you get to the finale in “A Blade in the Dark” the Iron Maiden feel is so incredibly vibrant that I can't help but think back to the Powerslave or Somewhere in Time eras and smile, knowing that finally someone understands that use of subtle nuances are much more advantageous than full-on thievery; this should be handed out in manuals for any new band bent on recreating the wheel past the first chapter of “Chapter One: You Can't Reinvent the Wheel”. Just go with your inspirations and create your own music, a feat Air Raid does quite well.

Within the span of 40-minutes Air Raid takes you on a journey into heavy metal supremacy with ten tracks designed primarily to elevate your stagnated expectations beyond what you could imagine It's actually refreshing to hear such basic elements being used to their most supreme potential. If I were to say this is very much like a great 80's metal entry it would most likely unfairly date the music, so I'll just suffice it to say that this little jaunt backwards is definitely a full leap forward.