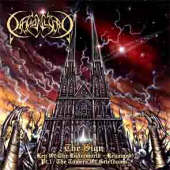 Type: Full-Length
Release Date: 2002
Label: Medusa Productions
Genre:
1 Intro
2 To The Absolute
3 The Ancient Lost Knowledge
4 Through The Portal Of Time
5 The Departure Of Hypocrites
6 Beyond Hate
7 On The Wings Of Vengeance
8 Martyrdome
9 Mankind´s Decay
10 Of Wolf And Battle
11 Outro

First things first, I am going to get my major gripe out of the way straight off the bat with “The Sign (Key of the Underworld – Regained) Pt. 1: The Towers of Griefdom”. The production on this album is pretty abysmal. Things start off adequately (in terms of production) with the opening track ‘Intro (The Sign)’ everything is crystal clear, but following that “The Sign...” takes an ominous turn. The dark and well worked atmosphere of ‘Intro (The Sign)’, is soon replaced by a horribly distorted and buzzing mess of sound in ‘To The Absolute’ and unfortunately for Daemonlord it does not really get any better as the album wears on. However, that being said, there are some very positive points in “The Sign...” to consider.

Despite having such a horrendous production, it is still easy to take into account and more importantly, appreciate the music that Daemonlord have put together on “The Sign...” even if the production may seem amateurish, the music is clearly and simply very, very professional. Spanning just under 33 minutes, Daemonlord blast their way between death and black metal through 11 solid songs. Though only a young band (formed in 2000), Daemonlord show they have what it takes to really make it on the black metal stage. Drums are blazingly heavy, vocals are dripped in venomous acid, and guitars rip along in perfection to assist in spinning tales of space and time in an almost disheartening reflection upon humanity. We are presented here with some interesting lyrical concept and not the usual baggage that freely flows forth from the various black metal scenes around the world.

“The Sign...” has not been produced with the highest budget ever available to a metal band, and it shows. Guitars distort, vocals gargle and the drums can be a little fuzzy. However, for a starting band the duo of Kepa and Sixto know exactly how to ply their dark craft. Hopefully for them (and the well-being of our ears), Daemonlord will be able to benefit from a more hefty sum of money next time, and then we may really be able to acknowledge effectively the talent that they possess.

Bottom Line: If Daemonlord had the budget of the latest Dimmu Borgir album or that of Satyricon’s “Rebel Extravaganza”, I think Daemonlord could well be the next interesting platform in black metal art. For now we shall have to cross our fingers for part II.