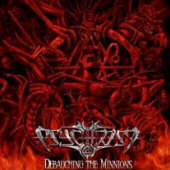 Hailing from the glistening shores of Australia, you would be forgiven to think that Psychrist comes from anyone of the contemporary metal scenes in the Scandinavian parts of the world. Blasting through a mongrel composite of mincing black metal and pummeling death metal with more emphasis on the black metal side of the ledger “Debauching the Minions” is a worthy album to many a fan into the death or black metal scenes.

I had never heard any of Psychrist’s music prior to listening to their second album; “Debauching the Minions” I am embarrassed to admit to, (being that I am Australian and they are Australian and solid Australian metal is few and far and between today). While not being the most revolutionary metal breed ever, Psychrist do know how to go about shredding and dicing with the best metal outfits out there, the opening track ‘Scourge’ is a more than adequate example of the crossover capabilities on “Debauching the Minions” that Psychrist are capable of.

The ability of Psychrist to play black/death metal band is surely a nifty aspect of “Debauching the Minions”, but the real beauty of this release is that they are equally competent at both death metal and black metal. By that I mean, many black/death metal bands you usually find are weak in one aspect of their trade, while they may be strong (or weak) in the other side. Psychrist do not suffer this pitfall in the slightest. ‘Haven of Betrayal’ is pure holocaust casting black metal banshee wailing mayhem that any Darkthrone fan would get straight into, while the track ‘Depraved Humanity’ is more up fans of Belphegor’s alley. I believe the fantastic closer acoustic track; ‘Habouring the Fire’ is also noteworthy as it displays a more melodic/calmer side of Psychrist which will hopefully be explored in the future and give rise to an even more diverse behemoth of metal within and abroad of Australia.

Bottom Line: To wade through the superfluous usage of adjectives, Psychrist is very sound band who specialises in death/black metal. “Debauching the Minions” is not groundbreaking and nor does it seek to be. Recommended for death and black metal fans who seek alternative edges to the common norms they are presented with on a daily basis.