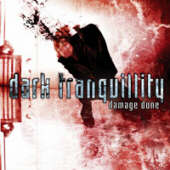 I have definitely been damaged by the sixth opus from the mighty and underrated Dark Tranquillity. It is really a pleasure to be able to hear something so refreshing, deep, aggressive and well done in the same package. "Damage Done" is full of surprises that will leave you breathless.

As many of you know, Dark Tranquillity, together with bands like At The Gates, Ceremonial Oath and In Flames, were responsible for creating the sound that in the mid 90's became known to the world as Melodic Death Metal. It is funny because none of them could be really categorized into this sound anymore, a thing that is primarily due to the fact that these bands are always in constant creation and evolution (or have disappeared of course).

Returning to the exquisite "Damage Done", I can tell you that it is one of the best works the band has ever recorded (well, all of them rule so this may not be a complement for some of you, but keep on reading). In some songs they have returned to their murdering "The Mind's" rhythms, you will love it. This means that once again we experience the Dark Tranquillity speed found in their first releases. We also have the half-time "Projector" rhythms here and there, and the incredible electronic atmospheres found in the amazing "Haven".

Without doubt, with this release Dark Tranquillity will gain new fans and recover the old ones. A CD with this composition can only be praised for its complexity, originality and most important, emotion practiced in each sonical journey.

"Damage Done" is the perfect mix between past and present Dark Tranquillity. I can't express my happiness after knowing that the mighty Swedish demons returned to their roots without loosing the innovation love that has always been such an important piece of their music. If you get the Digipack version, the one I got, you will have the 'I, Deception' bonus track and the 'Monochromatic Stains' video.

In the beginning I mentioned how damaged I was after listening to this CD for several times. I am still hurt and I hope that you can also reach this level of pain once you have in your hands what in my eyes is the best CD of the year.

Bottom Line: A must, a must and of course a must.

This is the story of the one and only Dark Tranquillity. Over the past few years, this renowned joint forefather of the current Gothenburg ‘melodic death metal’ scene has changed somewhat. As we are all too painfully aware, most bands mellow with age. The most obvious example of this is Metallica who really should rename themselves to “Hardrocklica” to reflect their current sound, but there is light at the end of the tunnel for Dark Tranquillity have done quite the opposite... they have become more angry and heavier as time goes on. This is a good thing!

I remember hearing "Haven" for the first time and thinking “wow, they have really got heavy since "Projector", this is great”, but Dark Tranquillity have really turned things up a notch with "Damage Done" while still maintaining the sound they made famous. The two major elements that I think have been used to take this new opus to a new level are; The aggression of the vocals. Mikael Stanne has really demonstrated how powerful his voice can be with this recording. The experimentation with the clean vocals on previous albums has been discarded and it’s a guttural death onslaught from start to finish. He has also changed his style a little, on previous albums he had a very distinct style of singing, which did make each song sound very similar vocal wise, but Mikael is now demonstrating a versatility he has not shown before which is a refreshing change. The second major contributor to the new heavier sound is the speed of the drumming. Like the vocals, Anders Jivarp has taken a much more aggressive and varied direction with his drum style. Avoiding the cliché beats that have been very present in past recordings, the drums have been well thought out perfectly executed.

As usual the production is brilliant, thankyou Fredrik Nordström and Studio Fredman. It is interesting that Dark Tranquillity always return to the same studio for their albums. I have nothing against this because they get a better sound every time they are there. They unlike other bands, seem to have a very clear idea each time they enter the studio on the sound they want, as apposed to others who change studio’s with every recording in the hope they will gain something new.