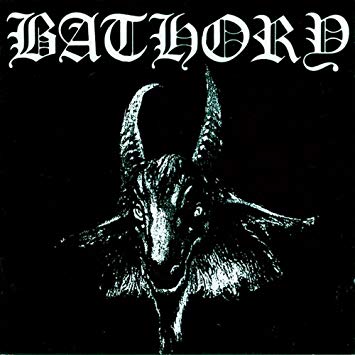 Bathory's debut had a ridiculous playtime. Its design was almost painfully reduced to the essentials. Additionally, Quorthon (R.I.P.) made no secret of the fact that he was heavily inspired by Venom. His song formula was very simple and the album got the award for the most primitive drumming of all times. Furthermore, the lyrics glorified violence and sucked completely. Please do not expect me to go into details. Yet it is a fact that this album influenced legions of metal musicians and that alone is an excellent thing. But it gets even better, because all these aforementioned shortcomings paled beside the aura of the album. Its uncompromising approach, its stubborn bigotry and its youthful excessiveness merged with each other and a beast emerged from the primordial soup of black metal. Bathory must be seen less as a debut but rather as a statement. This groundbreaking album is the manifesto of evil.

You must be able to afford to be primitive at times. Quorthon's musical (and lyrical) primitiveness knew no boundaries. But nobody took care of this situation, because his riffs and his malignance were capable of challenging Venom and Slayer at the same time. Of course, Quorthon did not need more than one riff per song. Everything else would have been a waste of resources. But each and every of the eight riffs was provocative, lethal and brilliant. With an outrageous explosiveness, the guitar salvos angrily burst out of the speakers. Filled with hatred and even more hatred, the unholy vocals heralded nothing less than the end of the world. In this lyrical context, 'Armageddon' or 'War' chose a global approach, while 'Reaper' set the focus on individual destruction. To be honest, the lyrics of the later made me feel slightly desperate in view of its extremely moronic lines like "Every virgin needs a rape".

Lyrical content aside, the average speed was remarkable. Six songs were mercilessly rushing forward, only 'Necromansy' and 'Raise the Dead' followed a less furious approach. Especially the latter one added a certain amount of atmosphere. The funeral bells at the beginning transferred the listener to an autumnal cemetery and the subsequent riff was fairly melodic and ironclad at the same time. To put it very politely, the lyrics were slightly influenced by Venom's "Buried Alive". Please compare Bathory's "I gasp for air / I scream for sight" with Venom´s "My lungs gasp for air / My eyes scream for sight" and form your own opinion. I see a minimal similarity, but maybe I am just a pedantic bureaucrat? The line "I tear at the lid" was also cribbed by Cronos. But everything is allowed as long as the result is right. And 'Raise the Dead', there is no doubt about it, belonged to the best tracks of one of the best albums in terms of black metal.

The B side was slightly stronger than the first half. The extremely energizing riff of 'Armageddon' and its minimalist yet absolutely effective bridge attacked the neck musculature of every headbanger and 'In Conspiracy with Satan' appeared as a sonic hellfire. Not to mention the elemental sounds of Quorthon during the one-word-chorus of 'War'. But under the bottom line, I also appreciate the songs of the A side very much.

When subtracting the overlong wind intro of the relentless opener 'Hades', the album surprised with a playtime of less than 24 minutes. A long time after its release, I read in an interview with Quorthon that he had been quite unsure whether it was a good idea to put such a short "full-length" on the market. But it has been shown that most metalheads are intelligent people (I am the exception to the rule). They were therefore focused on quality and not on quantity. Well, we can discuss whether the production shines with high quality. It was reduced to the necessary minimum, but - unlike the songs - it offered a very individual sound. I guess that attributes like raw, perfidious and infringing describe the production in a suitable way. However, the mix formed an indissoluble unit with the songs. Long story short, Bathory still marks a unique masterpiece of a lone wolf that acted both instinctively and successfully. Its place in history is guaranteed.

What does one say about Bathory? To most underground metal fans of the 80's the one-man show from Sweden was the absolute king of black metal, designing and forging the ground for all who followed after. To others? Well, Quorthon was one of the masters of the medium, so anyone who can't or won't recognize this isn't worth including here. After all, it's opinion if the man's music was any good; the fact that he laid all of the groundwork for the early 90's rise of the so-called second wave of black metal is fact, so it's indisputable.

Some 35-years after this debut first slithered into the metal underground, Bathory has solidified its place in the annals of black metal history. Its coveted time in the grand halls of metal luminaries is not only well-deserved but necessary in the formation of at least two other genres. Black metal, from any era, country and sub-genre, owes a tremendous debt to Quorthon, without question. I understand well that Venom coined the phrase, had the album of the same name, yadda yadda. Venom's sound was rooted in NWOBHM and thrash – debate it if you like – and while the style and subject matter was firmly established, the sound was certainly cultivated by Bathory to the nth degree. No one screamed wails of perfect tortured anguish before Quorthon; no one else took barely-tuned guitars and managed to create a whole new area of heavy metal music that would stump, shock, and delight kids the globe over; no one in 1983 knew that metal history would forever be changed without benefit of expensive production, proper instruments, big label pushes or anything even close to positive reviews.

The underground would be the eternal judge and jury for these little pieces of art.

I first heard Bathory early in 1985, my 13th year, by way of my wonderfully-departed neighbor, whose dubbed and store-bought tapes made my pre-teen mouth water. My education from Scott Preston will always be immeasurable to me, and this album was no different. What I managed to take in was some of the worst-sounding production I'd ever had the pleasure to hear. I had no idea something so badly muddled could leave such a resonating statement echoed ruefully among the ruins of the metal contingent over the last five decades. The cover alone, the coveted yellow (or white) goat's head surrounded by a sea of pitch black that long associates itself with heavy metal. What managed to come sputtering out of my headphones in such harsh and high-pitched messy tones were songs that would not only help define my slight, innocuous role in heavy metal's grand pantheon, but set me on a path from which I was never to again stray. Between this album and Venom's "Black Metal" I was home.

Bathory comes on like a runaway train, overused analogy forgiven, tumultuous and painstakingly raw with its pre-Pelle Ohlin “corpse sound” in full effect from the first distorted chords of “Hades”. Satanic imagery and romanticism aside, the screeching vocals, tinny guitars, non-existent bass, and haphazard drumming cast a dismal shadow over the underground music scene. By mid-1985, people were either impressed with Bathory or wondering aloud what the guy was medicated with; like it or not, Bathory was here. This record is rife with hooks and thin riffs that would later emerge on many a black metal catalog. Every song on this debut is absolute essential “first-wave black metal”, riding close the coattails of such masters of bleak and black imagery like Black Sabbath, Coven, Black Widow and the less dismal Motorhead. Possibly by accidental design, Bathory is a resignation to the whims of a colossal madman ripe in years, but old in vision. Songs like “Necromansy”, “Sacrifice”, “In Conspiracy with Satan”, and “Raise the Dead” cast considerable shadows on the peers of that time; no one was simply daring (or poor) enough to attempt this to such a memorable degree (while I, too, love Hellhammer the overall talent was to emerge later under the seminal Celtic Frost moniker). This is a record filled with horror movie visuals, biblical warnings, sexually-sadistic fantasies, and enough Halloween caricature to satisfy any ardent metalhead. What Quorthon managed to do, either by aforementioned accident or impetuous youthful design, was to set the bar so high with such low material that thousands of imitators have slapped on cheap dime store make up to mimic the “black metal mode” in either accidental or deliberate servitude to him. Either way, this album, the finite areas of early black metal, was to stand and serve as a constant reminder that music is always a sincere rush of blood and passion, not always a technically sound foray into instrumental bliss.

It should also be noted that there two distinctively different versions of this recording going around. The coveted “yellow goat” version issued in 1000 copies is somewhat superior in sound, allowing for sharper tones and clearer sound all around. Once Black Mark decided to “remaster” it, the charm was lost, and the sound thickened to where it just doesn't sound organic anymore. Every copy of this post-yellow goat suffers the remastering fate, so unless you can plunk down the $1000-$2000 price tags on the vinyl or about $80 to $100 for the Combat cassette the flawed, albeit inoffensive remaster will have to suffice.

Bathory music is NOT for everybody, and, to be quite frank, it really shouldn't be. It's not designed for everybody – you shouldn't just waltz into this genre with patches you order from social media halfwits or shirts you can buy at the local hipster hangout in the mall. This is music for the truly fringe fan base: searchers, hopefuls, introspective and impressionable people in a time frame where impressionism was still a trait, not a symptom. Bathory's Bathory was a time, a place and feeling long before people with too much free time on their idle hands decided social media memes and cute cut-and-paste jokes were how this music should be seen and heard. When you hear this record for the first time, or even the thousandth time, you should always catch the feeling of it: dark, foreboding, evil, even comical fare with such tongue-in-cheek lyrics to be had deep in the songs. All of that should be Bathory.

And it forever is. Lighting in a bottle.