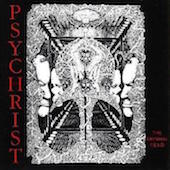 Looking at the artwork of the CD you'd be forgiven to think that this is going to be black metal. The black and white art with the red lettering, the band's moniker and the Rotting Christ and Enslaved shirts some members are wearing on the band pic all give that impression anyway. However, when you push the "play" button on your cd-player you get force-fed a harsh dose of death/grind brutal enough to cause some lasting damage.

The band comes charging out of the gate right away, blasting it out with a sound I could probably best describe as early 90's Suffocation played by Australians. If you are familiar with Aussie bands like Bestial Warlust and Sadistik Exekution, you'll understand what I'm trying to say here. They are perhaps not the most original out there, but looking at what some other death metal acts were doing at that same time (1995), this is just beyond awesome! Psychrist has the skills to pull of the NYDM thing without any problems whatsoever, churning out low-tuned death metal ferocity with blastbeats aplenty, alternating with bludgeoning slower passages. It's in the execution of the music that you can hear that typical deranged Australian vibe coming through, with the band delivering their style with that typical frothing-at-the-mouth insanity we have come to know and respect from those bands I already mentioned. The level of aggression is kept high throughout and the short duration of this EP ensures that the band does not wear out it's welcome anytime soon. Add to this the more than adequate production and you have yourself a short 'n' sweet fix of death metal brutality right here! Those last 5 minutes of weird noise at the end weren't really necessary for me, but if that's the only thing to nag about on a cd as awesome as this, I will kindly overlook that.

This is recommended stuff for everyone into old school stuff like Suffocation, Goreaphobia, Sadistic Intent and Mortician, and I'm willing to bet that people into the more demented black metal stuff like Blasphemy, Ouroboros (CAN) or Spear of Longinus could find something in here as well.

To put it in the words of another bunch of Australians: if you want blood, you've got it !!!