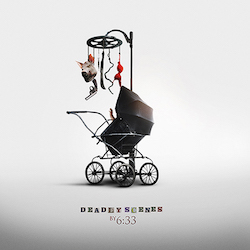 I always love when I receive something in my promo pack that doesn't say "old school death metal", "atmospheric black metal" or "heavy doom like (list bands that everyone loves)". I have become very picky over the past several years on what I let into my listening world. I have become fed up with the hundreds of clone bands, playing the above mentioned styles, but without the execution or creativity of those that came before them. So, when I came across Deadly Scenes by 6:33 and it had key words (Paris, avant garde, Mike Patton, Devin Townsend and Tim Burton) I became instantly intrigued.

Upon first listen I was toe tapping and head bobbing, this largely due to the excellent musicianship and catchiness of the songs. These songs will draw you in and are well crafted. However, that's where it stopped with me. When I listened again, not that I didn't notice it the first time, I realized what I had in my possession was the ultimate clone band. Deadly Scenes could be the transition album between the Mr. Bungle self titled release and California if Disco Volante never existed. This doesn't just resemble Bungle, it blatantly rips them off. Everything from the start and stop riffs, the intense genre jumping and most of all vocalist Rorschach doing his best Mike Patton impression. Even the song titles "Ego Fandango" and "I'm a Nerd" reek of Mr. Bungle.

With that being said, there are some great moments contained on Deadly Scenes. Opening track "Hellalujah" is fun song, opening with a choir singing "Lord Jesus" shows where the band is coming from and it's sense of humor. One of the the heavier tracks "I'm a Nerd" will draw in the more extreme metal audience, while "Last Bullet for a Golden Rattle" shows that the band can do it's own thing. I really wish they would have wrote more songs like "Last Bullet for a Golden Rattle", but in the end what 6:33 gives you on Deadly Scenes is a carbon copy of what Mr. Bungle did better 15 to 20 years earlier.

Deadly Scenes isn't a horrible listen and if you crave more Mike Patton music that isn't Mike Patton then you will enjoy this. The musicians are top notch and the execution is near flawless. This would have scored way higher with me if they had any original ideas. 6:33 shows promise based on their ability as musicians to be something special, let's just hope they find their own style on future releases.