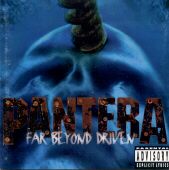 After being quite stunned by the amount of negative, and quite ignorant - reviews for this album, I felt it was time to bring some perspective to this great and important album.

Seriously, there are reviews written by kids who were 6 years old when this album was released and given a whopping 0% score. Give me a fucking break.

Back when this album was first released, metal was in a quite dismal, beaten up state. Not many bands were around carrying the torch, but the few that where are undeniably important. Pantera, Sepultura, Slayer - all of these bands helped push metal through the 90's, without it rotting in the gutters.

For some reason, Pantera always get slammed for being a "fake" thrash band. Uh, I don't ever remember them saying that they were a thrash band to begin with. They are what they are and comparing them to classic thrash bands is pointless and retarded. Anyone expecting a "Beneath the Remains" from these guys is even more retarded. The ones who constantly say that they just ripped off Exhorder are even dumber.

After the legendary Vulgar Display of Power, I firmly believe that Pantera did a great job of following up that record. Here, the songs are a bit slower and much, much heavier, with the trademark Pantera sound. Dimebag's playing on it is relentless throughout, well planned, and well executed, with shit loads of devastating riffs.

Sure, you have the classics that everyone knows - "Becoming", "5 Minutes Alone", "I'm Broken", etc, but this album offers a whole lot more. It's not just 3 good songs, with just mindless shit for the rest. Take "Slaughtered", a complete mammoth of a song - huge, deep riffs heavy enough to rattle your eyes out of their sockets. "Shedding Skin" also features some downright excellent guitar work, and throughout the whole album the band performs great.

No one ever even talks about "Throes of Rejection"… I just don't get it. A complete fucking kick to the head, yet it gets no praise whatsoever. When the massive riff kicks in at 0:58, you better be ducking for cover. Just totally awesome, raw, pure aggression.

Their cover of Sabbath's "Planet Caravan" is also a nice touch, and a fine way to end the album.

Most of the reviews I read are those dumb, metal elitist types who still think Gorgoroth writes good music. It doesn't make sense to review an album if you weren't even fucking born when it was released, so please fuck off and do something productive with your time, because those reviews aren't clever or cute, and actually quite misleading for those genuinely interested in picking up the album.

Pantera were playing sold out venues during the 90's, being quite busy with kicking everyone’s faces in, while most black metal bands were still releasing albums which sounded like they were recorded in a giant tank of horse shit. No thanks, I'll take Pantera any day of the week.