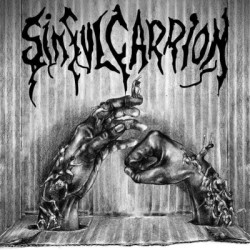 The debut album of the band Sinful Carrion was recorded and produced in Aurora studio close to a city of Poznan with Daniel Witczak behind the knobs, and released on the market independently in August 2014. Musicians played together for seven years to get their way to create Just-World Hypothesis. This CD is 8 solid bites of death metal seasoned with melodic inserts, just like the exquisite dish is seasoned with master’s chef sauce and the consumption of this dish takes less than 37 minutes.

The material opens with a radio station noise, which after some deliberate tuning turns into a proper part of the song - "Cathexis". It is a piece with a varied formula maintained at a rather medium pace. That one is no stranger to breakdowns and death metal pounding. It is an opener track that gives you a quick shot without showing entire firepower of the Gdansk quintet. Next one -"Cargo" has a sharp, aggressive beginning, marching middle part with melodic solos showing artistry of guitarists, and then bass guitar in the end arousing the other instruments is like the so-called cherry on top. But as I mentioned, this is just an introduction. "To Mr. Nobody" also begins with the classic death metal bloodbath, but it is a melody of riffs and solos that gives this song atmosphere. "Divine Intervention" is the most distinctive song but looking for Slayer comparisons would simply go in vain. Whole thing spurts of guitar melodies and vocals. For some, it will be the so-called "star" of the album, for others it will be a step too far for over sugaring death metal nature of the album. To calm everybody down I'll only add that in my opinion Sinful Carrion did not overdose on melody here, but let's have all interested in the works of the band evaluate that for themselves. The title track "Just-World Hypothesis" is the most twisted piece. So much happens here that many bands would have enough material for a full length release. Guitar-wise this song is a slower one, as for the drums… not necessarily. Short thumping sections with rapid transitions make an impression! "Lazarus" with its construction goes back to the scheme defined for the "Just-World Hypothesis" but absolutely DO NOT take this as schematic, boredom, etc., because these terms do not fit in description of Sinful Carrion’s debut. This is mid paced, pulsating death metal varied with short bursts of speed and very interesting ending. "Human Backup" begins with the sharp, jagged riffs. Breakdowns interspersed with ruptures of speed. Ending - "Collision Course" is probably the fastest piece on the album, and ideas and themes in mid section and at the end encourage successive plays the album.

This is a really decent piece of modern death metal laced with melodic solos and also well made sound wise. As I already mentioned, the band released the album themselves and this is quite puzzling for me seeing and hearing what else appears on the market with the help of publishers large and small, but I think this is just the fate of Polish bands (Manipulation, Redemptor). The album was released very expertly though. Digipack edition with 12 page booklet with graphics, lyrics and photographs of the band. I encourage you strongly to purchase the CD. Just think how much deeper you will enjoy the music by peeking into the lyrics and looking at pencil graphics decorating this release. The road to happiness is simple, and the cost is small ($ 10) - http://www.shop.sinfulcarrion.pl/kategoria/cd.