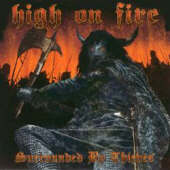 As the latest addition to the bizarre Relapse family, California’s High on Fire should have no trouble fitting in amongst labelmates Neurosis, Bongzilla and Today is the Day, because they, like the afore mentioned bands come with an entirely original sound and are just as unique at crafting that fine music for the intoxicated gentleman. Whenever my interest in the underground metal scene needs a bit of a jump-start I check out the record label that has become famous for promoting artists that push various musical extremes and all things in between. High on Fire seem to be a pick somewhere from the "in-between" pile and the young blood of metal has not disappointed me.

High on Fire sound like some distant cousin of Entombed, playing those muddy, rock-influenced riffs on a distorted and down-tuned death metal guitar. The deep sound throughout the album makes it harder to make out individual notes and invites you to focus on the album as a whole. Usually moving slowly, the songs have a tendency to keep to the same subtle pattern for long time, eventually sending the listener into a trance with clever arrangements and long riffs that at first seem to have no direction, but make sense by the end of each arrangement. The guitarist and bassist put in their share of complex rhythm patterns, but it is the drumming of Des Kensel that really adds a whole new level to the music. The tempos are painfully slow but he makes sure to fill in every crack with drum fills and intricate tricks. The track 'Speedwolf' is a good example of all the band’s elements coming together; opening with a seductive clean-guitar melody and then slowly drawing you into the main riff to kick start the song, keeping you virtually hypnotized the entire time.

The need to retain that distant and mesmerizing atmosphere, however, has its drawbacks. One is the noisy, "live show" type production and another is the negligent mixing job, which has left the guitars virtually untouched and sounding very monotone. It is best to give this album as much attention as possible with a clear mind. Overall, "Surrounded by Thieves" is a very ambitious debut from a promising band. If they can hold on to all the energy and passion they show here and mature their sound over the next few albums I believe they can create a cult following and eventually become one of those obscure and phenomenal bands like Neurosis or Morgion.

Bottom Line: Mesmerizing stoner-rock death metal. If you want something different in your metal (and by now most of us do) check this band out.