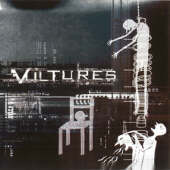 At its core the Vultures project is industrial band with hardcore vocals thrown in with techno beats for good measure, and to keep the blood pumping. What isn’t as apparent until a few listens through of this short MCD/EP/Demo is that Vultures is something that is infectious and throttling to the senses; enough to ignite kidney hemorrhaging and cerebral carnage through their sonic density.

The opening song ‘Internal Plea’ kicks off with some techno/cyber chanting followed by a dense undertone of synthesizers and effects and then a brief respite until the rest of the musical onslaught flies into top-notch massacre-mode. Vocalist Rani Zager I would guess would be equally suited to a metal band or hardcore band as he would to this ‘industrial sound system massacre’ as described by Vultures themselves. One name that many of you may recognise playing on “Vultures” is Maor Applebaum (Sleepless) who was 50% responsible for the excellent progressive-dark-ambient-jazz “Winds Blow Higher” album last year.

While not being the strictest metal album in the sense of the word, I thought this album was a worthy inclusion to the metal world due to the fact that I am sure some folks who dug some of the more subtle industrial elements of many industrial metal albums may really get into the full industrial experience via Vultures.

Bottom Line: If you found yourself wishing some metal bands could build upon a particular industrial beat or atmosphere that was happening throughout a specific song or album, then perhaps Vultures could well be an avenue worth exploring. Whilst I am not suggesting Vultures is the answer to the industrial/metal solution, there is enough cool material on this MCD/EP/Demo to warrant a good look up and down.