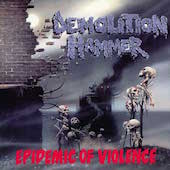 ...and the same goes for the band's name and the artwork... We go back to the year 1992. Thrash metal seems to be dead (fortunately, today we know that it was only in a comatose state). "When the Storm Comes Down", "Renewal", "The American Way" and "In Search of Sanity" - these words are already engraved on its tombstone. However, there is a mighty force that strikes back. Its name is Demolition Hammer.

I have seen the exuberant reviews on this side and I broadly agree. Nevertheless, I never had the thought to build an altar for Epidemic of Violence, because I don't think that each and every song is a killer. In contrast to the vast majority of other albums, the second half blows your mind, while the first half sounds good without reaching the top level. The most exciting part of the pathologically brute album is kicked off by the title track, which is placed on the seventh position. The last three songs lend the album a touch of immortality. They bundle the strengths of the combo in a fascinating manner.

The title track is driven by irresistible leads and Steve Reynolds, lead singer and bassist, sounds angry and absolutely pissed off. Okay, his angry voice is an important feature right from the beginning of Epidemic of Violence, but these details don't matter. The seventh track with its sudden tempo changes shows that even extremely ferocious songs profit from a fairly catchy chorus. But "Omnivore", the following track, is even more brutal. Epidemic of violence, indeed! "Omnivore" seems to be the sonic depiction of a deadly shot of a sniper. Its precise, sharp and straight hooliganism violates any usual form of aesthetics. More or less the same applies for the closer. In spite of the fact that the band has written another concise chorus with an iota of melody, "Aborticide" presents the audience a total mutilation of beauty. It makes clear for the last time that Demolition Hammer's heaviness is based on brutality, vehemence and ruthlessness. Whatever stands in the way of this grim triple strike at the end of the album, the songs unleash a storm that will blow everything away.

The further tunes are anything else but bad. In terms of style, they are aligned with the aforementioned explosions. It is interesting to note that the songs do not put the focus on a smooth flow. They sound choppily (yet professional) and the staccato riffs are surely a reason for the extra portion of sadistic violence. The production supports this compositional approach, because it spreads a certain coldness. Unlike various thrash bands, Demolition Hammer did not create a racy sports car, but a surprisingly maneuverable steel colossus, a tank that fires continuously. Their unpitying version of thrash does not really border on death metal, because animalistic growling and low-tuned guitars are missing. It also does not contain even the smallest grain of black metal. Yet it lies in close proximity to brutality itself. Needless to say, that the high velocity of the compositions does the rest.

Epidemic of Violence is probably not a masterpiece of compositional brilliance, it has lost a few percent of its power over the years and fans of diversity should not look out for this album. But it has some great tunes and another crucial advantage: back in 1992, it was a statement against the effeminacy of (more or less) the whole scene. Completely pigheaded, the band members tortured their instruments (and nobody thought that their next output would join the list of the aforementioned lukewarm outputs). Maybe with the exception of the title track of "The American Way", the albums that I mentioned at the beginning are forgotten. Epidemic of Violence lives on. Isn't it great to be a part of such a righteous community?