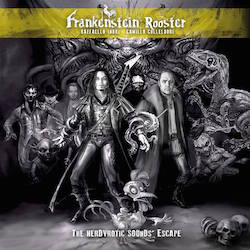 What's in a name? A Frankenstein Rooster by any other name would sound as sweet. Does a name matter when checking out a new band? Does a bands name tell what to expect musically? Sometimes a bands moniker tells you something about their music. Would you expect Slayer to play ballads or My Dying Bride to play happy songs using major chord progressions? The answer is a resounding NO! However if you never heard Blue Oyster Cult would you have any clue as to what musical style they were? I think not. So what exactly is a Frankenstein Rooster?

Founded as a side project of Elvenking guitarist Raphael Indri and drummer Camillo Collelouri, these Italians rock hard. The Nerdvrotic Sounds' Escape is a guitar showcase instrumental album in the vein of Joe Satriani, but with a firm grip in heavier melodic metal similar to The Fucking Champs. Add in some great movie samples from 'Star Wars', 'A Clockwork Orange' and others, along with a couple of electronic songs you get a memorable, challenging and entertaining release.

There are many different styles that are expressed on this release, but the most prevalent is melodic guitar metal. There are no vocals, so the instrumentation is extremely important. The mixing of some electronica, jazz, funk and rock elements makes the songs more exciting. The energy and the excellent musicianship is what really define this album. I love the mix of crunchy guitar riffs with flawless melodies and the soloing is on point. The songs have great structure to them as well. This is what can always hurt instrumental albums, if the songs lack that structure to keep the listener interested. A lot of times the guitarist just goes meandering off into some self indulgent tangent. Very little of that is experienced here.

The album opens with the title track that displays a lot of the above mention styles. Beginning with a funky opening riff then incorporating electronic elements before an all out frenzy of melodic and crushingly heavy riffs. The album continues along that same path throughout, mixing in little elements of other musical styles, but remains constant in its melodic metal approach. "Mullog" is a slower track that has very emotional guitar solos. It is one of the albums different tracks. "The Phantom of the 13th Orange" is neat little song that has electronic moments, really heavy guitars and samples Alex's soliloquy before his jump from the window in Kubrick's masterpiece 'A Clockwork Orange'. Album closer "Sevean Argagn Dance" has an all out electronic club dance beat. I love this song and I see it's 13 minutes as summing up this journey in the silly fashion that the album displays. However don't see this silliness as stupid. The late Frank Zappa asked the question "Does Humor Belong in Music?", my answer is absolutely. The ultra slick production make for a super clean sound, I usually don't like this, but in this case it only furthers the greatness of Raphael's playing. Loaded with harmonics, crunchy chugging riffs, smooth melodies and amazing arpeggios there is something to make every metal head break out the air guitar.

Frankenstein Rooster may be the worst moniker ever, but the music that's contained on The Nerdvrotic Sounds' Escape (A great album title) is worth your time. If your a fan of monstrous riffs, melody, wailing guitar solos with progressive touches then this album will appeal to you. Sprinkle in really clever, humorous, well timed samples and you have an extremely enjoyable listen. So I ask you again. What's in a name?