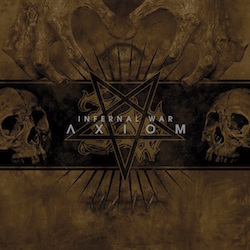 It's been eight years since last album Redesekration came out, interrupted only from time to time with very good, smaller publications in the form of EP Conflagrator and Transfigurations, which was a split with Kriegsmaschine. Gentlemen of Infernal War did not hasten with the delivery of a new batch of hellish discharge; before their album was released even partners of said split released new album and their silence lasted even longer. Yet today, Polish black metal scene looks a bit different than in the past decade. The level is indeed high, some bands congealed, a lot of new ones came to be, and these are the ones that try to go head to head with the more complex varieties of the species in this field, some are even able to compete with the best. For a moment - given the content of "Transfigurations" - it seemed that the Infernal War cautiously explores new ground, slightly slowing down and incorporating more breathing space into their insanely fast work.

It turned out that, although successful, it was a rather shy one-off jump. The band naming their new album Axiom seemed to clearly indicate that this is a return of real Infernal War, the one that we had the opportunity to get acquainted to on previous albums. Angry, pissed off and merciless, striking with a vengeance of a tornado that re-arranges houses, re-plants trees and relocates cars. Or perhaps axiomatic Infernal War is one that does not have to prove anything to anybody, the one that does just what it does best and is not particularly concerned about trends forcing them to be 'avant' or even 'post'. For this band the only thing that counts is a solid pounding in accordance with best practices laid down years ago. In the end, black metal is not some cream puffs; it is war, isn’t it?

Interestingly enough, Infernal War seems to occasionally wink to the audience, saying, "Look, we could experiment more, but we don’t feel like it." A perfect example of this is offered as an opener, 'Coronation' is one of the more varied songs on the album, which mixes the tempos, does not avoid the atmosphere and surprises with a short, explosive solo, also similarly to 'Into Dead Soil'. In turn, the 'Militant Hate Church' has a lot of death metal elements served Swedish style, there is also great, catchy, middle part of the 'Eater of Hope' and 'Paradigm' proving (although actually there is nothing to prove, because others have done it already) that the Polish language works better in black metal more than in any other genre of heavy music. Similar flavors are spread around in virtually every composition, because Axiom is a material well-tailored, but they are rarely able to pierce through the storm of guitars and ripping monolith of Stormblasts drums.

The band doesn’t lose its brutality, intensity and uniformity of the message even for a moment, and probably such was their intention. In this aspect, Axiom is a direct continuation of the previous two albums, so whoever did not respond well and adopt Infernal War style and design from the very beginning, is unlikely to be able to assimilate to this new chapter. In turn, the band fans certainly should not feel disappointed, and with frequency of materials being published by this quintet they will also not be too weary, even though the album doesn’t surprise and it bases on well known patents. Axiom is simply a solid dose of furious blistering black metal, with all the pros and cons of this style. For me, the pros dominate the cons.