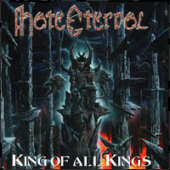 Buy on: Bandcamp
Type: Full-Length
Release Date: 2002
Label: Earache Records
Genre: Death
1 Our Beckoning
2 King Of All Kings
3 The Obscure Terror
4 Servants Of The Gods
5 Beyond Redemption
6 Born By Fire
7 Chants In Declaration
8 Rising Legions Of Black
9 In Spirit (The Power Of Mana)
10 Powers That Be

The trio of Anderson, Roddy and Rutan certainly know their stuff; there is no doubting that. Countless years in some of the biggest known acts (you all know of whom I am speaking) have assured us that Hate Eternal will be nothing less than a band that creates sparkling death metal albums time and time again. They are simply too professional to do otherwise. Derek ‘One Take’ Roddy’s drumming is absolutely superb and he continually beats the skins without any lapse for the entire duration of “King of All Kings”. Rutan’s vocals are devastating and morbid, suiting the atmosphere and lyrics of Hate Eternal perfectly. The bass guitar work of Jared Anderson is as consistent and vigil as ever, providing a perfect underlay to the shredding of the aforementioned Rutan on guitar.

Notice how I am not really enthusiastic about this record? ”King of All Kings” a very good record, don’t get me wrong, but it doesn’t fill the emptiness inside me that I guess I was hoping it would do. It’s proficient, reliable death metal, but it’s really not much more.

Bottom Line: If you are into death metal and most extreme brands of metal, you could probably pick up ”King of All Kings” in a heartbeat. However, if you more accustomed to the more obscure takes on death sound, then perhaps I might advise you try before you buy. While this album might be discussed as a classic for many millennia to come, it’s not the sort of hat that fits every head.