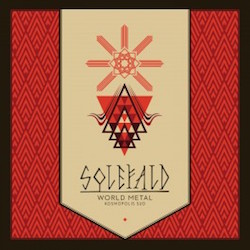 Heavy metal has always been a style of music that was meant to work outside the box. Early on it was seen as a fad, a passing phase. As it grew stronger, limitations seemed to be placed on it as a genre. Thankfully forward thinkers like Celtic Frost, with their envelope destroying release, Into the Pandemonium, once again were pushing listeners comfort zone. In the early 1990's Norwegian youth were taking the world by storm with a stripped down approach both musically and production wise. This first wave of Norwegian black metal would eventually lead to some of the most remarkable, progressive, avant garde and outright weird music on the planet. However, this was not viewed as a good thing by all. The "true" black metal elitists bashed this move forward. This seems ludicrous since black metal was created to thumb it's corpse painted nose at "the norm". Enter Solefald.

Since their 1997 debut The Linear Scaffold, Solefald have been the purveyors of all that is "weird" and likewise awesome in music. Having one foot deeply rooted in it's countries main export (black metal) and a fist in array of different genres. With their 8th full length World Metal. Kosmopolis Sud, Solefald continues to push the proverbial envelope and challenge listeners. It's folk, it's blackened something, it has electronic enhancements and yes it is absolutely metal. It's twisted yet coherent and will have listeners salivating and begging for more.

Throughout the albums 8 tracks it touches on a variety of different styles but nothing is ever forced or seems out of place. This is something that Solefald have maintained in their career. Their ability to make such insane musical arrangements remain catchy is quite amazing. The appropriately titled opener "World Music with Black Edges" begins with a nice little keyboard passage that evolves into a mix of different styles with clean and harsh vocals working in unison. It has tribal drums, electronica, heavy guitars and flawlessly moves in and out of all this, it's a true avant garde experience. The silliness of "Bububu Bad Beuys" is one of those songs that, if it weren't for being so catchy, would seem ridiculous, but somehow Solefald makes this work. The vocal stylings are reminiscent of the chants in Pink Floyd's "Several Species of Small Furry Animals Gathered Together in a Cave and Grooving with a Pict". "Le Soleil" furthers the eclectic music that make this band something special. Somewhere between 70's psychedelia and black metal, this may be the albums best song, but that statement is hard to make on an almost perfect album. I have heard Solefald talked about in the same breath as The Beatles. On an artistic level I agree with this comparison.They never compromise their artistic vision while creating memorable songs.

World Metal. Kosmopolis Sud is a grower of an album. If you are looking for immediate gratification then move on and listen to something with far less depth. This is an album that requires and deserves multiple listens to fully appreciate. Trust me if you take your time with this, it is very rewarding. Solefald are head and shoulders above their peers and after 20 years are still moving forward creatively.