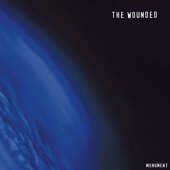 Front-man Marco V.D. Velde and co. return with a far superior effort to their debut, “The Art of Grief”. Receiving mixed reactions from some of the press for 2000’s effort, The Wounded have taken onboard the criticism (both good and bad) and responded with a record that contains some truly inspired rock/goth/darkwave/metal moments that slaps the ass of any would-be-opposition.

For the uninitiated The Wounded are an outfit from Holland that play gothic darkwave music that would be pliable for many of the vampire clubs out there. Whereas many bands rely on the core of the music to move and twist a listener, The Wounded go about their songs relying on mood and lyrics (in much the same way as Katatonia). Here is a band that works on emotion and atmosphere, not snazzy and artful solos and clever music compositions. While this may sound dull, let me assure you it is not, and makes for a peaceful change from multitudes of bands that can play competent music, but write rat-shit lyrics. The song ‘Garland’, while not being the most accomplished piece of literal work ever revels in the atmosphere of Marco’s voice and seemingly gains steam while it works to an exhilarating climax entwined with cleverly placed gun-fire samples to make for an even more impressive song.

While I could sing the praises of “Monument” forever, there are a few negative aspects of this album. Firstly, I think Marco has a voice you either love or hate. Personally I reckon he has a cracking voice and I got into The Wounded the first time I heard them. However there are bound to be folks who don’t really dig how he goes about his singing. Secondly, there is really, really depressive stuff on “Monument”. The atmospheres throughout almost every song are almost tearfully upsetting. Add some morbid and morose lyrics and you have a remedy for despondency and an abundance of painkillers. (There is really not much to be too happy about here which sort of makes sense being called The Wounded and all, you wouldn’t expect these guys to be frolicking with the dandelions and gypsies, hell I don’t think I have seen more of a downbeat band photo in all my years in this caper).

Besides the few negative aspects of “Monument” (which aren’t really negative in the true sense of a music review), The Wounded have put out a quality album. Worth a look.

Bottom Line: For a break from the heavy and harsh world of metal, you can do a lot worse than The Wounded’s almost miraculous follow up. “Monument” is at least double the quality in every aspect over their debut, and to add further credibility to this just look at the score.