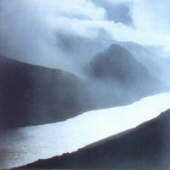 Enslaved has always been a band that I’ve highly admired. They are consistent in releasing quality albums that while not all groundbreaking or absolutely fantastic, are well done and never leave you feeling like you didn’t get something out of it. “Frost” is their sophomore release, and while it isn’t highly original or amazing, it’s a well-done and rewarding album.

What Enslaved decided to do with “Frost” was to travel the path of chaotic black metal that rarely lets up one iota. At the time it fit right into place with the beginning of Emperor, Mayhem, and Darkthrone, but that doesn’t mean it was as genre defining as those bands.

Production-wise, “Frost” is far above the rest of the large black metal bands circa 1994. Production comes second hand to the music itself though. Compared to a band like Emperor at the time, Enslaved really weren’t stressing their creative side. Despite the fact that Enslaved weren’t as creative, they did have certain qualities about them that helped keep them afloat other than production. They had their own chromatic sound, which gave the band a distinctive sharpness and ability to stand out. What Enslaved were also able to do as well as anybody else was to create an good atmosphere. Be it the subtle and haunting keyboard melodies of songs like ‘Svarte Vidder’, the grim and cold guitar riffing, or the sometimes slow, melodic guitar of tracks like ‘Isoders Dronning’, Enslaved always pulled it off. The band also put an epic edge on their music, not only on songs like ‘Yggdrasil’ where it’s readily obvious, but on the overall feel of the album. So while “Frost” falls short in some areas and prospers in others, it still makes for a good listen from time to time, strictly for the aforementioned factors.

While “Frost” is good, it happens to disappoint me when I listen to it. It had serious potential, but it was missing something that pushed it over the edge. It didn’t have the trance inducing qualities of “Vikingligr Veldi”, nor was it as memorable, or epic. That aside, “Frost” does have its high points and it does have a worthy place in Enslaved’s history.

Bottom Line: People who really enjoy bare bones black metal will love this album, and others will find it just satisfying. If you’re a fan of Enslaved, it’s sure to hold some appeal.