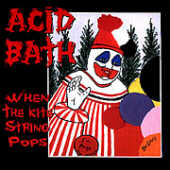 Bands that transcend genre’s in their music is something that is quite popular in the metal scene today, and rightfully so. It’s certainly not a new thing, seeing as Acid Bath, along with others, was doing it in the early 90’s and far before. The difference between today’s bands that like to toss every influence under the sun into their music and Acid Bath is that where former fail, Acid Bath make the connection with manner and grace. “When The Kite String Pop’s” is Acid Bath’s first full-length contribution to music and it’s a very good beginning to their short career.

When we put all the sounds and influences of Acid Bath into one convenient tag, it becomes known as what many people call ‘Louisiana Swamp Metal’. They’re about as thick as the southern end’s humid air and almost as welcoming. Building that atmosphere are their references: early doom metal ala Black Sabbath, Rock & Roll, death metal, and other various outputs.

When Acid Bath finally starts to rev the engine of their fine craft, you will witness one monstrous album of monolithic proportions. The way they achieve this is by a little thing that I like to call ‘variety’. Acid Bath can and will perform those intense rides that hammer against your skull, but they’re all aware that a break from the intensity is being called for. They don’t have any doubts about grabbing an acoustic guitar, taking their distortion down a level, or changing the tempo. Those tempo changes are a necessity for making the songs appealing, and it’s no surprise that the band nails those swift transitions with ease. Not just transitions of tempo though - they do everything well. From sludgy riffs into mood enhancing cleanness, Dax Rigg’s howls to his singing that sounds as calm as a prayer, and from each song into the next. Yet even with all the different motions that Acid Bath go through, they still make way so that with every note you can feel that emotion of each member. Acid Bath have taken all of the important things about music and taken them to new heights, and personalized them in the form of “When the Kite String Pops”.

If you didn’t get the indication that each of the members are important in Acid Bath yet, then know now that they are. Let me explain. Every member’s presence is felt here strongly, but nobody takes more than their fair share. So when Audie Pitre churns out those bass lines at full force in front of everyone else, it’s not because he wants to impress you. It’s because that’s what the song needs. And when Jimmy Kyle beats you with his precision drumming, he isn’t worried if you think he doesn’t use enough of his double bass drum. His ideas are more than fantastic for everybody and everything. Guitarists Sammy Duet and Mike Sanchez work together section after section, not trying to out due each other, but to just do the best that they can. And Dax Riggs, the member who arguably owns the larges share in the bands stock, makes all those loose ends come together at the end. When you put these five into the same room they will always continue to blossom.

Bottom Line: Even though “When the Kite String Pops” is very good it’s not as awesome as the follow up, “Pagan Terrorism Tactics”. This is still a worthy album to be in your collection.