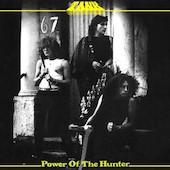 I haven’t spoken with many of them, that right. Nevertheless, I guess every potential prey fears the power of the hunter, but I doubt that many of them know the eponymous album of Tank. Otherwise most hunted creatures would probably say okay, I thought a greater force endangers me. Power of the Hunter has strong openers and closers, both on the A and the B side of the vinyl, but what about the six remaining tracks? Well, a lot of mediocre stuff shows up and it gets obvious that Tank returned to the studio much too soon. Make hay while the sun shines isn’t always a good thought.

Given this situation, the listener is confronted with the glorious riffing and the catchy chorus of the totally cool 'Used Leather (Hanging Loose)', but also with very uninspired tracks like the boring and nearly trite 'Some Came Running'. It speaks volumes that a solid, but not outstanding cover version ('Crazy Horses') belongs to the better “non-opener/closer” songs. Tank create more or less memorable lines like the chorus of 'Set Your Back on Fire', but a couple of tracks lacks the essential degree of aggression. Indifference starts growing, because the tracks stuck in tiring mid-tempo frames and only 'Red Skull Rock' is on a par with the four songs at the beginning and the end of both sides of the vinyl. In terms of style, the album is not far away from the debut, but Tank have lost 10 percent or more of their formerly shown unruliness. I don’t say that some parts of the album were written in order to gain commercial success, nevertheless, they sound quite lame and non-charismatic.

The production achieves a higher level than the song material. The bass of Algy is droning permanently, the guitar sound is okay (even though it could have been equipped with a little touch of nastiness) and the voice sends greetings from the sonic pole position without being too dominant. Just like the tracks themselves, the mix avoids any form of opulent bombast. It seemed as if Tank had found their typical sound, but already the next album with a completely different line-up told another story.

Anyway, it remains a mystery why Tank thought it could be a fine idea to put a pretty average number like 'Pure Hatred' on the second position, although the solo of Peter Brabbs makes me prick up my ears. Maybe the band wanted to pay tribute to the old motto “save the best till last”, because the closing title track made clear that the band still had edges and corners. The vigorous, robust and comparatively fast-paced piece glitters with minimalistic yet fiery riffs, dynamic and a proper dose of ruthlessness. It surely belongs to the best songs Tank – regardless of the countless personnel compositions – have ever written and with the knowledge of today, one can say that it was the last song of the formation which put the focus on pure and naked metal. Either way, the main trait of the second and last album of the original three-piece is its ambivalence.