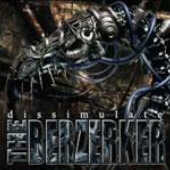 Inside the metal circles, Australia's Berzerker has made quite a little name for themselves as an intensely brutal machine that pounds out death metal riffs as fast as they do electronic accompaniment. Their industrialized grindcore/death metal pummeled the ears of eager new listeners with their debut self-titled album 2000, and now 2002 these cyber warriors are back with their follow-up, "Dissimulate."

As with most death metal, most albums fail to offer a progression or maturation between albums. For Berzerker, they have kind of fallen victim to this, yet at the same time haven't. "Dissimulate" is more or less a second serving of their debut album; brutal death metal riffs ravaging through your speakers while somebody is screaming their head off in the most guttural of ways. However, to the credit of Berzerker, "Dissimulate" is a more concise and focused album. The songs are well written, and despite the fact that the intensity of Berzerker has worn off now that we've grown accustomed to their sound, they band is still a lesson in what cacophony is all about. Berzerker truly know how to put together a dark and grim album.

There are a few elements of Berzerker that listeners will either love or hate. First off all, seeing as Berzerker have an industrial edge to them, the drummer uses a specialized distorted kick drum. Their drummer is definitely a very skilled musician, but I don't quite see the point in the electronic sound of this drum. It tends to get on nerves if you pay too much attention to it, and it's hard not to seeing as it's blasting away for nearly the entire duration of this album. The other element that some might find either enjoyable or off-putting is the traditional grind use of samples. Throughout "Dissimulate" you'll run into them in various places. Thankfully they never really interrupt the music in too great of a manner, and they are brief.

Bottom Line: If you enjoyed Berzerker's debut to the extent that you feel it warrants further exploration into their music, then by all means, pick up "Dissimulate." It's a far stronger record and definitely gets the job done. For the rest of the extreme music listeners, approach Berzerker with a bit of apprehension, but they could really impress you.