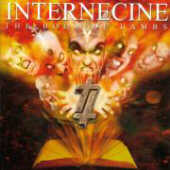 Sometimes it amazes me how guys already playing the most brutal death metal known to mankind start their own projects and still rip the guts out of their instruments. Guys, don’t you ever want to show us your softer side? Perfect example, Internecine. Jared Anderson, a well-known individual to the metal community from his days in Morbid Angel and still active member of Hate Eternal decides to starts his own thing and what does he do? He makes sure that I have to plug an extra fan to not over-hit my receiver.

As you probably already figured it out “The Book Of Lambs” represents yet another release of extreme death metal but filed with so many great ideas it would be a shame to be hidden from the world and the hungry death metal fanatics, like me. While to most of us Jared is known to handle the bass molestation activities, yet in Internecine he is the man responsible for everything except drums and a few solos done by no one else but Eric Rutan, who also handles the production aspect of the disc. To close this impressive lineup Derek Roddy and Tony Laureano appear as guest musicians and that in itself guarantees the best drumming you can get.

“The Book Of Lambs” doesn’t start with any foreplay intro but with forceful attack ‘The Elder Gods’ that sets the tone for the remaining tracks except the ‘Hymn Of Sanctity’, which is the scariest piece of vocal sampling I have had the pleasure to hear. I’m not that easy to be scared off, but it really sounds like a gateway to hell just opened in my very room. Crunchy but brutal guitars combined with intensity and speed unmercifully pound every note but while this fit is nothing unusual in today’s scene Internecine manages to lay it on surprisingly well-written melodies. Not In Flames type of melodies that stick in your head like well-written hits but ‘delicate’ (probably not the best word to be used in with conjunction with Internecine) layers that make “The Book Of Lambs” a highly consumable record. While not being the most original band out there; technical, fast and venomous “The Book Of Lambs” represents everything you might expect from such experienced musicians.

Bottom Line: “The Book Of Lambs” will satisfy every fan of American death metal scene and piss off every neighbor of such one. By dedicating it to ‘time of the destruction’ Internecine make sure that there’s no love between the two and that’s the way we like it.