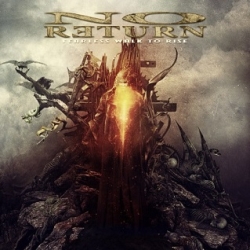 France seems to be very lucky to be the home of bands which marked the history of music by mixing different kinds of metal and doing it really well - Symbyosis, Misathrope, Yyrkoon to name a few.

But this year it seems the throne of the metal scene in France will belong to No Return as they have just presented their example of that brilliant mixture. The band's 9th album, released on their 25th anniversary, is entitled "Fearless Walk to Rise" and it's high quality product again.

Quite a lot of changes in the line-up (or as leader called it "redesign") - a new drummer, a new vocalist and a new guitarist. Basically the band always had one mastermind in the person of Alain Clément, but still I was interested how so many changes could affect the overall shape of the new album. And I am definitely not disappointed.

Usually the band is described by him as death/thrash, but Mr. Clément definitely has much more to offer. The album also has heavy metal riffs, heavy metal solos and a lot of other tiny details which make this album one of those few albums which have a mixture of what is best in metal. Some riffs and melody lines have something in common with metalcore, on the other hand in "Submission Falls" for example the chorus sounds as if it was sang by Peter Tägtgren himself (Pain-style, not Hypocrisy-style). But definitely the main core of their music is melodic thrash/death, with vocals being 90% death metal growls. Keyboards are also an important part of this album, I wonder if it's Al1 who recorded them as well as they are a great addition and complete the compositions very well, adding the epic atmosphere.

This album really keeps you on your toes by surprising changes in tempos, switching from distorted guitars to clean guitars, from death metal riffs to thrash metal riffs, then to heavy/power metal. It's almost impossible to pick the best track on this album, mostly because each of them has something different to offer, making it one of those albums that you listen as a whole. And then repeat. And every time you enjoy it even more. Fantastic journey through the world of metal music and another proof that it can be energetic, brutal and catchy at the same time. And it's really impressive to be that creative after 25 years of being on the scene. And it goes right on my top shelf of albums of 2015.