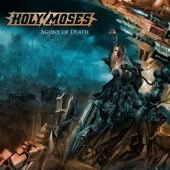 What is the shortest synonym for one eternal Sabina and thousand ephemeral musicians? You're right, Holy Moses is the solution. Agony of Death is another album of the front woman with an interchangeable line-up in the background. Well, a lot of these German bands that started in the eighties have a surprising stamina. Formations such as Grave Digger, Kreator, Sodom and many more have released tons of records throughout the decades and the question remains: was this really necessary? The names of the most popular works of these bands are "Pleasure to Kill", "Agent Orange" or, in the case of Holy Moses, Finished with the Dogs and they indicate that the most creative days are long gone. Nevertheless, Agony of Death removes dust from the Moses monument. More than that, it is a surprisingly strong performance.

No doubt, the songs have a good foundation. There is a lot of substance, energy and dynamic. Good preconditions for a thrash metal party, if I am not mistaken. Sabina's clever marketing strategy also works. Since Queen of Siam, she always sounded like an old witch after 48 hours without sleep and now, more than 20 years after the release of the debut, she has no problem to stick to her style. (I don't want to say that she has become old or that her voice sounds grumpy, this would not be very charming...) Melodic vocal lines have never been her metier and so she just keeps barking monotonously. But despite this monotony, she has a certain charisma and it goes without saying that she is one of the most important and formative voices of German thrash metal. It is great to hear that this voice is still a very good partner for the jagged and edgy riffs that shape great sections of the album. These riffs are the main pillar of the songs and they form exciting tracks like the openers ("Imagination" and "Alienation") or "The Cave (Paranemsia)". The climax is reached with "Pseudohalluzination" (have a look at the self-referencing lyrics of the chorus, Sabina travels through time) where the band integrates smoothly a guitar line of "Near Dark", the first track from "The New Machine of Liechtenstein". Or do I suffer from a pseudohalluzination? The artwork also builds a bridge into the past, because the strange creature from the debut's artwork spreads its wings again on the back.

Indeed, the guitars prevail, but synthesizers also play a role. Their intermezzos connect the songs and this original, yet dubious idea is at the expense of the density of Agony of Death. Okay, one might say this is no big problem, because the songs themselves are never dominated by these atmospheric gimmicks. Nevertheless, I do not really understand why the band chose this approach. Maybe the quintet wanted to demonstrate that the record has a good production, regardless of the vehemence of the music. This plan worked; the album sounds forceful, but it also puts the interludes into the right light. In other words, the production is on a par with that of its pretty strong predecessor, Strength Passion Will Power. Inter alia the drums score with a natural sound and I enjoy the fact that Atomic Steiff played them. This legendary dude was also involved in one of the best debut albums ever. Naturally, I am speaking about "Malevolent Assault of Tomorrow" from Violent Force, the most tragic band of the early German thrash scene that never released a successor. Their album avoided lousy tracks and the same goes for Agony of Death. The twelve pieces of the special version form a really vigorous unit and everybody with an affinity for large-sized (playtime: 70 minutes!), mature yet angry thrash can have a good time with this output.