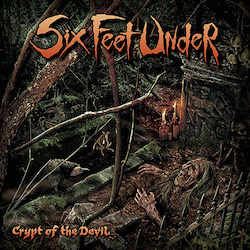 To me, this album is above average, not the "same old, same old" we got used to from this band, they diversify greatly. Most of the songs are moderately paced, thick heavy guitars, guttural throat, gruesome lyrics, leads that are ferocious and a production that's solid. I immediately got into this one big time because it's different, but in a good way. They maintain their death 'n roll sort of genre-type with more of an emphasis on a death metal approach, not really too much of an entire groove. The riffs are quite creative. I've never really been a Chris Barnes' fan, though I have respect for his band as well as his days with CC. He's different on here, now less burly throat and some higher pitched is up there too.

It seems as though this line-up here worked out well. The leads are phenomenal, very fast and played really well. Even though this is a little under 40 minutes in length, it doesn't lack ingenuity or creativity. The songwriting is entirely unique due to it's a catchy sort of feel. It's not  technical nor have anything that I've heard from this band has ever been technical; I'd say it's one of their best releases to date. I don't mean that because of past releases not been good, it's just that they've taken a little bit of a different thinking here. It reflects more of a darker sound with riffs that aim to show that more of plain death metal with a bit of groove too.

I think that justice was done here on the genre(s), Six Feet Under found their niche with this lineup and concept in songwriting. Sound quality was good, the mixing fantastic. It wasn't ill-fated or contemptible; I had that thinking in my mind before I played this one, but was greatly mistaken. Barnes is good here and who he selected to participate in the album worked out really well. It's gruesome lyrically though that's been the concept always. It's just that the riff-writing was superb and all of the music I have respect for. What's really lacked in past efforts were the lead guitar and really catchy riffs. They've always been heavy and here their concept of "heavy" is a more of a death metal approach.

I really didn't want to page through the lyrics especially disliking the name of the album but I appreciated the music and vocals to an outstanding extent. A lot of their albums that I've had in the past I never was a big-time fan of because of Barnes songwriting. This one definitely caught me off-guard. I think that this really is a triumph musically and sound-wise was done with precision. I wished that it was longer, but it is what it is. When I reflect on the lead guitar, it gets me reminiscent of James Murphy circa early Death and Obituary releases. The main guitar will just blast you with intensity and unique variability. There was a modicum of blast beating too!

I didn't think that this was a wash really; it had a tremendous amount of appreciating rhythms chalk that up with a hoarse voice and drums that crush. I think that they experimented somewhat, this is not as much groove to it; it's more in your face death metal. I liked it from beginning to end. I thought that it was a great effort by the band; I'll never be able to get into the lyrical concepts but the music, YES! Check it out if you're looking for heavy death metal mixed with a taint of groove to it and ingenuity with genuine quality!