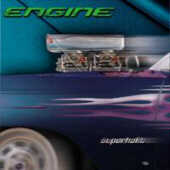 “Superholic” is the sophomore release from Engine, a side band of Fates Warning vocalist Ray Alder. Being a part of the Metal Blade Records roster, I was a bit surprised to find Engine boasting a hard rock sound not far from the recent wave of nu-metal. This prepubescent style of rock is often looked down upon by many people, and for obvious reasons. However, this recent wave of nu-metal can be bettered if done by the right band. Engine is a band that is above their contemporaries, and has taken the style up a notch. Nevertheless they still lack in many areas, which makes “Superholic” a release that isn’t worthy of recommendation.

Engine did quite a few things to set themselves apart from the typical things found in the nu-metal field. From a vocal standpoint, it’s great to hear a more melodic vocal style than just a wild scream. In the way Ray Alder presents himself, he isn’t trying to boast an angry edge that would generally comes across as fake, and he strays from the typical whine that usually accompanies this type of music. Musically, while guitarist Bernie Versailles and bassist Joey Vera’s style is simple, they do execute the material fairly well. Often times they’re catchy and help to keep the attention of the listener focused. In a sense of composition, the transitions between the heavier riffs to the more melodic and softer sections are something that keeps the songs moving along. It’s nice that the band brought something to this style of music that it often lacks, but Engine also lack in many areas themselves.

Engine certainly have achieved quite a few things with “Superholic”, but in the process of creating their music they seemed to have passed over some important things without much thought. Ray Alder may very well be able to throw melody into his vocals and keep away from those nasty genre cliché’s, but what he doesn’t do is convey the needed emotion to the proper extent. He fails to reach out to the listener and never makes the move to take the spotlight. In the make-up of arrangements and riffs, simplicity can often lead to great things. If you’re going to go for it though, you need to show some creativity. Versailles just lacks in this area. His ideas sound like a million other hard rock acts. Together the band may be somewhat tightly strung, but they’ve also stretched themselves to far, thus loosening them up too much for their own good.

Bottom Line: I’m sure if you’re into this style of music you’ll find something more to appreciate, but when I listen to hard rock I want something that has an entity of its own.