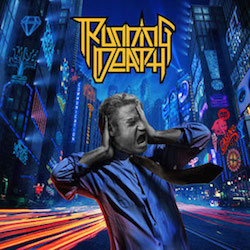 Thrash metal is usually a mix of spontaneity, fury, ferocity, sharpness and energy. Under these conditions it remains a mystery why a newcomer starts the debut with a vapid, pretty lame and faceless number like 'Hell on Earth'. Do not trust its title, the song lacks unbridled aggression in a significant manner. Fortunately, Running Death do not only deliver mediocre pieces. Already the next song ('Psycho') is equipped with some fast-paced, insistent riffs that push it on a higher level. Thus, we can overlook the fact that more than six minutes are a little bit too long for the somewhat fragile substance of this tune.

Apart from the quality of single songs, one must accept that the band has written a comparatively high number of rather slow parts. Fiery thrash sounds different. Additionally, some songs do not come to the point or hold just too many meandering sequences. An actually good track like 'Raging Nightmare', for example, fails to make your pulse race faster. Some instrumental parts destroy the power of the song in view of their pretty soft appearance. These intermezzos lead to a lack of intensity and this is a pity, because the technical skills of the band are out of doubt. Yet we all know that this is not the crucial thing. The compositional capabilities leave room for optimization, to say it politely. Good tunes such as 'Pray for Death' are rather the exception than the rule. Despite its dominating mid-tempo, the song scores with a certain catchiness. I do not listen to a masterpiece, but a solid number with an effective main riff. Nevertheless, the songs fail to present a good flow. They suffer from a lot of stop-and-go parts that just do not make sense at all ('Reduced') and overlong instrumental sections are not helpful as well. The same goes for the average voice of the lead singer. I am really sorry, but this guy has nothing that recommends him for higher tasks.

I freely admit that the production is putting emphasis on the guitars and that's a comprehensible decision for a thrash album. Moreover, the sound does not suffer from any major flaws. Nevertheless, the album is too long, it does not create the necessary level of energy and there are no parts that stick in the mind immediately. No track has a long-lasting effect and thus, the verdict is clear. For sure, Running Death do not lack ambitions and manual skills, but I wish they would start to write coherent, strong and energetic songs or stop to release albums. In their current state, they are not able to hold a candle to comparable bands such as Pripjat, Skeleton Pit or Traitor. These guys impress with their spontaneity, fury and... well, all these features that I have mentioned at the beginning of this review.