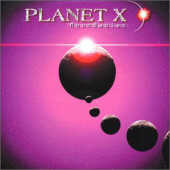 Two years after their debut album “Universe,” progressive instrumentalists Planet X are back, and they still haven’t shown any signs of slowing down even one bit. It’s quite the contrary, actually. Their new album “MoonBabies” is a ways ahead of “Universe,” with the trio improving in nearly all aspects of their music.

I’ve got to hand it to Planet X when it comes to musicianship. I don’t believe that an excellent musician is based on their technical expertise. What a great musician is, is a person that is not only creative, unique, and a good composer, but they also play their instruments for the benefit of the entire group. So, a good instrumentalist and a good musician are two entirely different things as far as I’m concerned. After I rethought about where Planet X was coming from, my attitude changed about where they stand in this particular category. I feel that Planet X, while they’re goal is to create the most insanely technical progressive instrumental music alive, really feel that the music itself takes precedent over any virtuoso-ism that’s taking place.

“MoonBabies” is surprisingly cohesive. The album throughout carries this futuristic theme or vibe, yet each and every song on “MoonBabies” has it’s own personality or style. For music that is so overwhelming in terms of its complexity, to be able to create an album that doesn’t sound the same throughout is an accomplished feat.

Planet X goes through in a multitude of styles in each song. Progressive metal, jazz-fusion, psychedelia, hard rock; you name it, and it’s there. Planet X also make it a point to not have the synapses in their brains on full throttle, leaving plenty of room for a less intense, but equally as gratifying sections of music.

While I was quite disappointed in Planet X’s “Live From Oz,” which showcased songs from Planet X’s debut album “Universe,” there is something about “MoonBabies” that has caused me to change my opinion on this incredibly talented band.

Bottom Line: Is Planet X self-indulgent? Certainly. On ”MoonBabies” do they let their virtuosity get in the way of making a cohesive, unique, well written, and well rounded album? I think not.