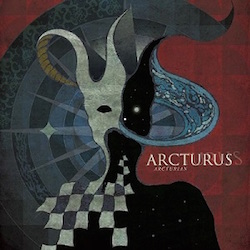 This wasn’t supposed to happen. Black metal was the music of angry teenage screaming and nihilism; now we get middle aged men crafting regal and refined opera suites. The black metal of Arcturus’ early days is still embedded in the idiosyncrasies of Arcturian, jutting out like rocks amid the sea. Prog metal now represents that briny and bottomless deep, frothing with wave after wave of synthetic symphony.

Not that I imagine myself an authority on black metal. I didn’t listen to the devil’s prodigal bastard child until I hit my mid 20s, and it took Emperor and Borknagar to finally grab my attention. I’ll revel in barbarian noise if the mood hits me, but my favorite people are the freakish mutants who should not have lived beyond the womb. Arcturus fits that second description, resembling a Gilda Radner character who lived beyond Gilda. They funnel her comedic dementia into pure egomania, dressing like steampunks and strutting with the arrogance of five Napoleons.

All that bravado would be wasted if not for their displays of intense emotion: love, hate, lust, envy, joy, despair… Often metal evokes Victorian romanticism, and from that perspective Arcturus are a dream fulfilled. When I compared their music to opera, I meant its full thematic implications. Those now celebrated Italian compositions? They were once considered low and debauched, because an opera meant tales of sex, violence, and madness. Today’s exercise in academic beard-scratching was yesterday’s pursuit of the sophisticated ne’er do well. Who knows what evil lurks in the hearts of prog nerds?

Arcturus entered prog rock territory a long time ago, sans the tepid cliche of playing as fast and as clean as possible. Instead, songwriting and composition are an excuse to collide sounds and genres like the merging of galaxies. Scattered amid the faux orchestra and the buffeting tumult, I find mild touches of electronic music. It’s just enough to raise a single eyebrow, allowing me to smirk at a signpost among the gorgeous albeit exhausting scope of Arcturus’ music.

Still, the band’s stylistic template is well established. There are no huge surprises, and we’re unlikely to see another world-altering masterpiece on the level of The Sham Mirrors or La Masquerade Infernale. These are guys with desk jobs and mortgages, and they have matured into the roles of weekend warriors and festival headliners. Will this be my instant go to for any mood? No. However, it’s an encouraging reminder that even excess can age gracefully.