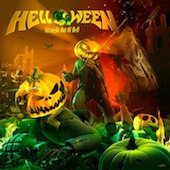 Helloween and I go back a long way. I can recall finding that first EP in a local shop for an unheard of $8.99 back in the day and being thrilled at hearing this new German speed metal that was slowly emerging from Europe. Since that happy day in 1985 I've managed a pretty basic on/off affair with the band that sort of manifests itself every couple of albums or so. Still lamenting the loss of Kai Hansen I have enjoyed some of what Helloween has issued over the years, save for the head-spinning Pink Bubbles Go Ape, so I was up to the challenge.

So what we have here is very 'typically' Helloween in that the speedy galloping is ever present, complete with keyboard accompaniment and soaring vocals. The vocal performance from Andi Deris shifts from a recognizable high register to a lower, gruffer effort, and Deris carries the songs evenly and without losing the 'original' late-Helloween sound. He hasn't lost much over the years and that's what helps make for a strictly baseline Helloween product.

So...how is the new album structure-wise, you ask? Helloween has some of the more die-hard fans out there, apologists even, which can be both blessing and curse. While the fans aren't as blissfully blinded as the loincloth-donning contingent of that New York-based band, they are very easy to impress. This current release in Straight Out of Hell is a pretty solid example of exactly what Helloween has come to deliver with every record. The power metal genre, literally saturated with pretenders and sickening rip-offs, panders to a specific metalhead that doesn't necessarily see a need for variances in style; Helloween has always been a founding forefather of the genre and it shows why in the new music, which, again, is both a positive and negative. I do enjoy the faster songs that border on epic, such as “Burning Sun”, which harkens back to that late 80's period quite nicely. Then you take a track like “Waiting for the Thunder”, which is about as AOR-friendly as it gets, and you see how the reliance on speed is both unnecessary and vastly rudimentary. The power ballad “Hold Me in Your Arms”, while not mesmerizing or even memorable, has a certain antiquated charm that is undeniably rich and warm ala late 80's MTV lighter-holding (if you look back on that period with any sort of affinity whatsoever). It's one of the tracks I'll honestly never revisit simply due to its lack of any resonate staying power, but it's not a total album killer. What does in the record for me is the fact that it's somewhat stale and far too faceless, relying more on formulaic design to muster through yet another album's worth of rehashed melodies already tired and overused.

Overall, the songs here aren't offensive or overly mundane, but the lack of ideas is certainly abundant in some of the same familiar chords, riffs, keyboard soundscapes and melodies. In short, if you've heard one album like this, you know have yet another, for better or worse.

To be honest, the tunes here will likely impress Helloween fans with no problem; the music follows a very distinct line that the band has carved into the long road underfoot. That said, they get points for being legendary figureheads in the crowded Pantheon reserved for gods and legendary figures revered for past deeds and accomplishments. Straight Out of Hell is one full hour of Modern Power Metal 101 as told by one of the originators of the genre, and while not widely memorable or even interesting past convention (the song “Asshole” was wasted space positioned only for gratuitous pomp, not to mention somewhat ridiculous) it will find a place within the hearts of the impressionable fan base.