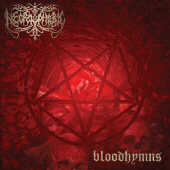 Necrophobic, the experts of painstakingly constructed black metal with an extra evil aura, released Bloodhymns in 2002. The band seemed to be in a very good condition. Equipped with an unholy rage, the four-piece forged an album that does not need a warm-up period. Instead, all churches go up in flames as soon as the first tones of the opener fill the room. Of course, not in reality. Let me remind you that Necrophobic originate from Sweden, not from Norway. Fine difference! But the houses of God start to burn in a figurative sense and the musicians, as much as I regret it, do not know where the extinguishers are. And even if they knew it - they would not use them.

Malicious riffs, flattening leads, sadistic vocals and high velocity drumming create very malevolent scenarios. Blood-soaked melodies justify the title of the album. Necrophobic prove one more time that they are able to establish a viable connection between the most furious parts which drag the listener down to hell and extremely dark harmonies that deliver a profound blackness. These two main components mutually influence each other in order to result in pretty perfect songs. Neither the rapid eruptions nor the majestic, more melodic sequences appear as a value in itself. Each part is aligned with further sections of the entire song and the smooth breaks and tempo changes never hurt the flow of the material. Even short acoustic breaks or screaming solo guitars submit themselves to the overarching goal, the creation of dense, perfectly flowing and monolithic compositions. Additionally, it goes without saying that the professionalism of Necrophobic does not allow a weak production. The voice and the guitars stand in the foreground without taking the rhythm section the air to breathe.

The first half of the album discards all scruples. Each and every band member has made a contribution to the song-writing and the manual know-how is out of question. Songs like the straight opener or the slightly more complex "Mourningsoul" want to engulf the listener in a maelstrom of vehemence and viciousness, while the majestic leads of "Shadowseeds" highlight other aspects. The unswerving double bass rolls out the red carpet for the accusing guitars and the lead vocals prefer a demonic approach instead of the usual mix of aggression and insanity. Unfortunately, Necrophobic are not able to keep the quality level of the first five, six songs. No need to panic, they do not make experiments. The interesting song formula remains the same, but the riffs are a tad less stunning. "Cult of Blood", for example, does not lack of anger and lustful destruction, nevertheless, it fails to stick in my mind. Good, but not outstanding - this describes the last tunes in a fitting manner. Anyway, passion and musicality are the main pillars of this full-length which always finds its way back from the shelf into the CD player. Listen to the hymns and enjoy.

Today, just like every other weekday I was on my way to work and since I hadn't take my usual caffeine dose, I was essentially the walking dead. I went into the building, took the wrong door and felt down... down into a giant spider web. Without any delay, this ugly looking arachnid monster went to greet me with a sadistic smile. Pointing toward the broken window, I was forced to look at the sun, admiring the beautiful effect of rays passing through the web. Then all of a sudden, with its powerful mandible, it cut clear my left arm. In great pain and fear, blinded by my own stream of blood, I turned to beat the beast but too late since off came my right arm. The creature seemed to take pleasure in my pain, if it had a visible mouth I am sure I would have been able to see it smirk. In an eerie screech the spider doubled in size as it reared up on its hind legs and then in one foul swipe of its front legs... my legs were no more. Blood oozed from my gaping wounds, causing me to nearly pass out in shock. Welcome to the world of "Bloodhyms".

What's the matter with me? I just got inspired by this new album from Necrophobic. After a successful line of releases with Black Mark but being unhappy with them, they signed with Hammerheart Records and it turned out a pretty satisfying deal, since soon after they started to write material for their first offering with the new label.

"Bloodhyms" is for sure a pretty scary and heavy opus! Top-notch extreme black/death metal with excellent musicians that bring everything to the limit and everybody in hell! Are fast, metered, melodic, aggressive, with lots of guitar riffs and ferocious vocals all how you like your metal? Well, you can't find a better band than Necrophobic to satisfy your demanding taste. These Swedish are masters of their art and their professionalism bleeds throughout the vampiric compositions available here. Even if you're not a fanatic of extreme metal, you can only appreciate and discover what made this band so popular. I specially enjoyed the last two numbers and the extreme metalists would simply go nuts on pieces like: 'Dreams Shall Flesh', 'Act of Rebellion', 'Cult of Blood'.

Bottom Line: Please note that "Bloodhyms" is intended to be played loud. Do you hear what I'm saying? No! Good! You got the point.