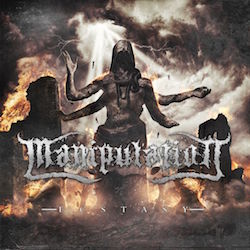 Manipulation - after three years of waiting the time has come to delight ourselves in the new release from this death metal quintet from Poland. I admit that their second release – Passion - awakened my animal expectation (blood, blood, more blood LOL). The third full length was released by the Russian Satanath Records; it was recorded in the Monroe Sound Studio (Vesania, Masachist) so no need to worry about sound recording and quality and Karol "Godzir" Malicki took up graphic design duties.

Ecstasy regales us with 10 hearty pieces of modern technical death metal with thrash-groove and death-core leanings that remind me of older Machine Head. Manipulation’s new album clearly differentiates itself from the wave of old-school-death metal happening nowadays. Not that I stand against it -quite on the contrary- I count myself as old-school guy and as a matter of fact I personally think that good music will always defend itself and it doesn’t matter how listener/reviewer pigeonholes it. Returning to the Ecstasy, album starts with a song “Insomnia”, after few second long intro goes medium tempo, kinda feeling out the grounds. “Sic Itur Ad Astra” in accordance with title should lead us to the stars, but for me personally, it seems that it is only the vestibule leading to the titled "stars". You must, however, admit that screamed out by Bruzyc (voc) sentence at the end of the piece makes an impression. “Lifetime” is one of the fastest pieces on the album. Do not expect, however, any type of grind-core thumping. There are, of course fast rides here but there are also plenty of breakdowns. Next – “Bad Boy” (oh-so-eloquent title, haha) Manipulation slows the gears down giving the audience a breather and serves something in thrash-core convention. However, nothing on this album is too obvious, and therefore this - what seems like - slower song is not slow in its entirety. “The Paradigm Of Unrestraint” is a renewed exemption of constant changes between harsher cuts and it’s such a delicious treat. Thus, half of the album is in the past, and the second part begins with a song promoting the album titled “Sunset Over Vatican”. That one should be mentioned together with the faster pieces on here and its program was enhanced with a guitar solo by Jacek Grecki of Lost Soul which I must admit makes quite a difference; without taking anything from the whole song of course which certainly stands out on its own. ‘Archetypes’ screamed out multiple times pierces your brain like a nail piercing Christ’s hand. The beginning of “Temples Of Vanity” reminded me of Gothenburg styled melodic death metal (In Flames in particular) but it got way more brutal at the end. Some trick those guys pulled here LOL. Here comes another nail - "pleasure”. Both of those "nails” and "Sic Itur Ad Astra" remain in your head long after turning your player off. “Burn Motherfuckers”- the title says it all, and musically it's a cross-section of the new release from Manipulation. Some parts are slower, some are faster, there’s some guitar twisters and let’s not forget about some interesting ear candy well placed in this song. Przedostatni Dzwiek Upadku is a song that could as well be on Poland’s Frontside earlier play list. With lyrics written in Polish this song is like a longing for the legacy of aforementioned. Title track “Ecstacy” finishes the album. The slowest and most chart-topping song, and for me it’s like a cigarette after good sex – it’s all over and yet….

I like to encourage fans of death, thrash and core to delve into Ecstasy by Manipulation. There is so much happening on this album that one listen would certainly not be enough, and everyone can find something to enjoy on it. Although I personally have a greater fondness for Passion, I also know that, despite the repeated listening sessions of Ecstasy, I'll come back to this album many times, just like I did with Passion.