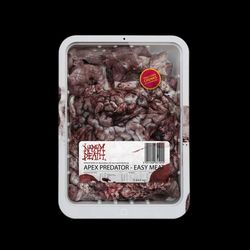 To introduce Napalm Death would be carrying coals to Newcastle. This is especially true because their sixteenth studio album spits on experiments and one still wonders how aggressive and enthusiastic these old boys are. Those "metal" fans who never liked the band will also hate Apex Predator - Easy Meat. Anyway, these guys have no clue. Napalm Death still mixes their unique cocktail of chaotic, anarchic, hyperventilating and sometimes ponderous lines and rhythms. 98% of the non-metallic part of mankind will say that "Napalm Death" is the shortest definition of everything that cannot be described as music. Yet we, the experts of good music taste, know it better. The formation from Birmingham has created its own acoustic universe, definitely noisy, revolutionary and totally uncompromising, but exciting at the same time.

As always, it is not easy to realize that the chaos is based on a solid structure. Blast beats, animalistic screams and sawing guitars shape an almost indecipherable code of terror. The entire album appears as a bloody lump of meat which is as appetising as the meat on the album cover. It needs some time to figure out individual features of the single songs, but Napalm Death deliver a certain degree of variation. 'Hierarchies', for example, starts with some rumbling lines that roll out the carpet for Barney's inhuman articulation. Rather slow, but hostile as hell. Anyway, suddenly an almost "normally" singing choir shows up and provides evidence that Napalm Death are able to write interesting melodies. They just do not like to do so. Just as a friendly reminder, this is Napalm Death, not Europe. 'Dead Slum Landlord', to name another example, is rather a desperate intermezzo than a regular song. Its fairly melodic parts dominate and convey a slightly surrealistic mood. But don't be fooled. It goes without saying that the ferocious full-length is mainly characterized by the erratic and aggressive vandalism of the British dudes. Brutality is a pleasure as long as no one gets hurt.

Of course, this musical approach needs a vehement sound and therefore I appreciate the fact that Apex Predator - Easy Meat does not lack pressure, transparency and harshness. This mixture creates a truly demonic impression. The constantly attacking guitar leaves a trail of devastation and I bet that no fan of the band's former releases will be disappointed. Quite the opposite, the orgiastic violence of the musicians convinces with its irresistibility. Just listen to explosive outbursts such as the slowly starting 'Timeless Flogging' which turns out to be a real sledgehammer. Or do you like to enjoy 'Bloodless Coup' with its mercilessly shredding riff at the beginning? Give yourself time to identify your highlights of a full-length with an even quality level. I admit that outputs of Napalm Death always leave me slightly disturbed and I am not able to say which one is the best of their albums. Yet I know that the here reviewed work is a strong piece of extreme metal. Not each and every track is a killer, but the vast majority of them celebrate a violent feast. There are not so many bands out there that are able to record such an intensive sixteenth album.