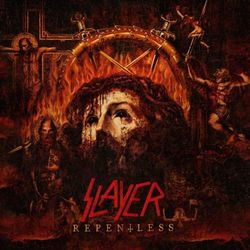 To introduce Slayer would be carrying coals to Newcastle. Let us therefore rush headfirst into Repentless. It was a very questionable dissemination policy to release four single songs before the full-length was placed on the market. And, of course, the best tune (the title track) was released just eight weeks before the publication date of the album in order to herald a new masterpiece of Slayer. The industry seems to believe that we are all stupid children who do not know it thinking and the consequential mechanisms. Be that as it may, it comes as no surprise that the title track stands out. It represents exactly that kind of Slayer which I enjoy. The song is neither innovative nor surprising, but the band is in its element. The neckbreaking old school riffing is driven by the precisely whipping drums and Tom Araya's voice transmits this diabolic vibration which shaped so many classics of the band. Repentless goes its way straightforwardly, simply irresistibly and without suffering from modern influences. Give me this song and I give you the entire World Painted Blood album - this would be really a good deal (albeit only for me).

But Slayer quickly relapse. A lot of rather slow parts take their toll with the effect that Araya, King and their prominent sidekicks are not able to maintain the fury of the title track. I freely admit that their best album (Hell Awaits) also did not lack of mid-tempo sections. Anyway, this was something completely different. Each and every song of their unparalleled second full-length had a distinctive character. The homicidal intro of the title track, the "Running and hunting and slashing" bridge of "Praise of Death" or the insane drum break of "Necrophiliac"- I guess you know what I mean. Yet who is able to distinguish "Vices" from "Cast the First Stone"? Probably nobody. But apart from the fact that I would be a little bit too late (roughly 25 years), I do not want to bash them for relativising the dogma of high velocity. The band is at liberty to shape its type of thrash the way it wants. It is just regrettable that the formerly divine formation does not show a higher degree of determination. Or to put it in martial terms, the band has lost its will to kill in the most efficient way. Apart from that, it is slightly embarrassing that they adopt a riff fragment from Destruction, just compare the beginning of "Atrocity Vendor" with that of "Death Trap" from "Infernal Overkill". I do not think that they had the intention to "cover" the Germans. It is just an ironic twist of fate that they share a riff with a band which was once heavily influenced by, of course, Slayer.

As expected, the production is flawless. The songs are put in the right light by a clean, powerful and sharp mix. Anything else than this crystal-clear sound would have been a nasty surprise, because I doubt that they had to keep an eye on the money during the recordings. Thankfully, there exist more positive things than the title track and the production. Kerry King has written some very strong pieces that are worthy of bearing the bloodcurdling name Slayer. For example, "You Against You" marks a late highlight. It follows roughly the path of the title track, but it is a little bit more complex. "Take Control" also bows down to the concept of velocity while scoring with the flickering guitars during the verses. "Implode" connects a sinister beginning with a high-speed continuation and its only minor flaw is caused by Araya's vocals. Whenever he screams the word "Implode", his voice sounds somewhat limited. And, by the way, Araya should shave off his ugly beard. He looks like his own grandpa.

I know that I am at risk to be blamed for my oversized nostalgia, but I want Slayer to be fast and furious. Thus, the major defect of the album is constituted by its aforementioned overdose of mid-tempo sections and songs. The running order of the tracks is also counterproductive in this context, because "Vices" starts a series of fairly lame songs. Admittedly, the band builds a more or less viable bridge to its approach of South of Heaven and does not appear as a toothless caricature of itself. Nevertheless, these tunes do not show the real essence of Slayer. The mediocre "When the Stillness Comes" marks the low point. It represents a kind of unsuccessful self-quotation, because it draws heavily on their own classics such as "Mandatory Suicide" or "Dead Skin Mask". Unfortunately, the here presented number is not able to create a comparably intense atmosphere. All that remains is a band that paralyses itself.

Approximately 30 years ago, an unknown pop combo sang a song called "Video Killed the Radio Star". In terms of Slayer, we have to notice that "Mid-tempo Killed the Thrash Metal Star". Despite some rays of hope, the band has ruined its apparently immovable status during the last 17 years (remember the incredibly trendy Diabolus in Musica) and Repentless cannot turn back time. But it offers at least four great songs that have the potential to stand the test of time and to join the ranks of their sonic legends. This and the absence of complete flops lead me to the statement that Repentless is a good record, no more, no less. My only regret is that Jeff Hanneman (R.I.P.) could not participate.

Okay, this is going to be a tough one to write. Like many others, I grew up with this band and have been following them since 1991. I’ve seen them live over ten times. I really wanted this to be good, but… it’s just not.

For some reason, everything after Divine Intervention has just rubbed me the wrong way. I could never really get into it, except for a few tracks here and there, like “Point” and “Screaming From the Sky” and maybe “War Zone”, for its straight up aggression. But really that’s about it. God Hates Us All was terrible (thankfully there are none of those horrendous nu metal riffs here), Christ Illusion and World Painted Blood were just forgettable. And especially after losing Jeff, I was really curious to see what they would, or could, bring to the table.

Ah, Jeff. The guy lurking in the shadows, never taking the spotlight, but writing the best and most classic tunes for the band. He didn’t have to prove anything to anyone. Jeff was the deal. He didn’t feel the need for flash, or hell, even interviews. He just did what he did. He did it better than most. Sadly, he’s not with us anymore, but if there was ever a member of Slayer I would have really liked to sit down and talk with, it would have been Jeff, hands down. He just seemed like a very interesting person, and a lot deeper than what he would allow the media to see. He liked his privacy and I absolutely respect that.

I’m not going to make comparisons to classic albums because we all know deep down that Slayer will never be able to deliver on that level again. But come on... the output on this album, for more than half of it, is just weak. Bland riffs, bland arrangements, and terribly stupid lyrics. Remember when Slayer lyrics used to be fucked up and good? Well they haven’t been like that for 20 years now. The lyrics here are embarrassing.

The production and sound on the album are decent. It’s nothing special, even with Terry Date behind the desk. Everything sounds okay, but just bland and uninspired. The only real problem I have is with the kick drums. How the hell did that even get approved? Really, that’s the kick drum sound? Speaking of drums, Paul Bostaph’s performance here is very, very boring. He’s just doing the bare minimum and nothing else, I never would have expected him to play it so safe. Let me also point out that I have no problems with Paul and in fact, I think his style suits Slayer more, as he’s more of a mechanical, cold type of drummer which fits in with their music better in my opinion. But here, he’s not even that. There’s no creativity in his drumming whatsoever.

Gary Holt is on the album, and I love Gary. I’m really glad he didn’t contribute anything to this, because pretty much nothing is noteworthy. He played a few leads and that’s it. Tom sounds bored and out of place at times, and Kerry…

Kerry is really getting on my fucking nerves. There’s no other way to say it. He’s treated Dave like shit over the years, talked shit about Paul when he first left the band, and was even a bit of a dick when talking about Jeff after his passing. And he will milk Slayer fans for every cent that he can because to him Slayer is just a business now – he doesn’t want to let it go. He would never have the courage to just stop Slayer and start another band. Why? No one would give a fuck. And he’s not capable of writing anything else other than half assed Slayer riffs, a mere shadow of his former self. Kerry is great live, but that’s about it.

I really wanted this to be good, but besides “You Against You”, the album goes in one ear and out the other. That’s the only track which is a bit different from the others and it works. The riffs are good, the arrangement is good, hell, even the leads are good. Thanks Gary.

While the album is not terrible and doesn’t feature anything as hideous as “Threshold” (seriously, go back and listen to that song again) it’s still not good enough. Slayer need to REALLY step up their game, they need to take risks, they need to be madly aggressive and angry next time around, so people will go “holy fucking shit – that’s amazing”, and if they’re not willing to do that, then they should just stop.

Only for the diehard's, I suppose. I thought I was one of them, but I guess I’m not. I’d rather listen to something else.