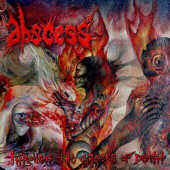 Abscess is one of those band’s that’s career is enough to make your head spin and to tie your thoughts in a nice little mess. They’re a reincarnation of Autopsy, this member left, that member left, he rejoined, they recorded this 7”, that 7”, countless demos, switched record labels a few times, and just about everything else that goes with that. If you put all the mess aside, you’ll realize that Abscess and their third album “Through The Cracks Of Death” is a powerful slab of solid death metal.

Abscess is in the vein of classic, or traditional death metal (like Autopsy). However, Abscess has this unique way of approaching their music. They don’t stay strictly in line with what death metal is, or isn’t. For example, on “Through The Cracks Of Death” there is very little usage of double bass or blast beats. It turns out well, usually holding enough energy to keep Abscess’ music moving without turning to overused drum techniques. Much of Abscess’ music has a very rock ‘n’ roll feel to it. The riffs cross both the death metal and rock barriers, and the solos just have a touch of that classic 70’s feel to them. Abscess also brings a doom influence into their music, which can be found in nearly every song. All three of these elements, when used well together as Abscess clearly do, end up creating a refreshing piece of death metal.

I’m sure Abscess will never get as much attention as Autopsy, for various reasons, but they still deserve more attention than what they’re receiving right now. Vocalist Chris Reifert sounds as sick, if not sicker than he did in his Autopsy days, and the rest of the members do just as well. Try not to think of Abscess as a reincarnation of Autopsy, but more as a band that is coming from the same place and have a similar vision.

Bottom Line: Abscess may do death metal in vein of the early days, but their unique approach to their music makes “Through The Cracks Of Death” twice as interesting as what you usually hear from modern death metal acts these days.