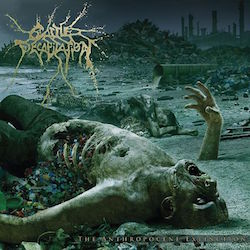 I usually associate Ukraine with black metal and questionable nationalism (not to mention my beloved Drudkh), so getting a death metal band was a mild curveball. Not only that, but this is an unusually prolific band, having put out an album every year since 2015 (with another one on deck in just a couple months). I don’t have a problem with prolific musicians in principle, but typically the quality is spread pretty thin if it’s over the course of several releases – if bands like this picked, like, the best tracks from two or three albums and made a full-length out of those, they’d be way better off.

For this reason Mental Phantom feels a lot more complete than I anticipated. The band’s only two consistent members are the guitarist and bassist, and unsurprisingly the interplay between those instruments is what gives this album that extra bit of depth. There’s a few ways this shows up in the music - the way the bass goes back to the root note right to supplement the punchy parts, the general bouncy resonance in the slower moments, or even just in how this isn’t afraid to experiment with saturated, clean melody in a death metal context – put it all together and you have some death metal that’s melodic, without fully crossing the melodeath bridge. If Kronos had a death/doom styled cousin, this isn’t too far off from that. Garden of Shadows is another good comparison, particularly because the title track on this album sounds like it straight ripped off their riff style.

While the melodic aspect of this album definitely shouldn’t be understated, there’s still enough crunch and chromatic noodling to firmly classify this in the “death metal” category. It’s the type of thing that sounds unique when it’s more closely examined, but on the surface sounds perfectly pedestrian. It’s usually what happens when unknown musicians have a lot of time together to build chemistry, creating a sound that is entirely their own without breaking any new ground in the process. That characteristic is the only thing that keeps Mental Phantom consistently engaging. Even if they’re playing a really boring riff, the warmth of the guitar tone keeps my interest going, and the fact that I haven’t quite heard the melody in that form does give it a certain novel and fresh feeling that actually sticks around (and even grows a bit) after a few spins of the album. The vocals are gurgly yet dry, which tickles my fancy nicely and complements the fuzzy-yet-clean aesthetic.

Where Mental Phantom comes up short is in the drumming department. They’re programmed, which I admittedly didn’t notice at first, so at least that aspect of them is well done, and they don’t sound like they’d be unrealistic for a human to play, either. They just…don’t sound like death metal drums? That’s a hard thing to quantify, sure, but there’s just too many beats that seems to follow predictable rock patterns and aren’t…iunno, overwhelming, bonkers, giving everything they have…even a couple of sloppy fills would have gone a long way in adding the extra dollop of spunk Mental Phantom desperately needs. On top of that, the overall pacing of the album is quite steady – sure, there’s some more complicated fills, rolling double-kicks, and all that stuff, but as all of that goes along it doesn’t feel like this gets any faster or slower, and as a result there aren’t the necessary peaks and valleys in speed or density that makes individual songs stand out. I like the title track and 'Transylvania' because they have some particularly tasty riffs, but ultimately the songs are only as good as the guitar parts are, and it doesn’t seem like the album flows in a way that supplements the riffs properly.

This is perfectly listenable, even interesting at times, but ultimately that interest doesn’t lead to something that genuinely captivates me. The riffs are really cool, but they’re woven into bland songs that don’t always get the most that they could out of them. I might look into a couple of other Navalm releases but given the high volume of albums in a short timeframe, chances are it all pretty much sounds exactly like this.

Cattle Decapitation have come a long way in there almost 20 years of existence. Forming way back in 1996 as a grindcore act, they released a demo, EP, and their debut full-length in 2000. With the release of 2002's To Serve Man, they started to transition to a death metal act. Over the next decade they began to get more progressive with each release finally putting it all together on their last release Monoliths of Inhumanity. To be quite honest folks, I don't care much for anything prior to Monoliths of Inhumanity. Last time out Cattle Decapitation made the best record of their career. This is a dangerous time for a band. Do they push forward and grow or just plateau?

The Anthropocene Extinction sees the band progressing and building of their last release. The biggest jump forward is in the vocals. Travis Ryan has always had the varied vocals, here he has total command of all of them and actually has added a few new vocal stylings to the mix. He's upped the use of his semi-clean sing/scream vocals, which I love. There is more dare I say sing-a-long chorus type moments. "Not Suitable for Life" is a perfect example of this. Musically it's a step forward as well. There's more melodic moments, more catchy elements in general. Please die hard Cattle fans, don't let this scare you. There is still all the death/grind there too. "Pacific Grim" incorporates all these in one killer track. There are also what I am going to call Symphonies era Carcass moments. "Clandestine Ways" fits into this category. The albums most interesting song and my favorite is "Circo Inhumanitas" It's absolute brutality gives way to a catchy chorus and is as close to a traditional song that the band has ever written. This is a formula that is starting to be used a lot more on this release.

Cattle Decapitation have become a force in the progressive death metal genre. It's a rarity that a band releases their strongest albums after 7 or 8 records, which is exactly what Cattle Decapitation have managed to do. Another step in the right direction and continuing to grow. The Anthropocene Extinction is another monolithic release from animal rights activist from San Diego and their best to date.