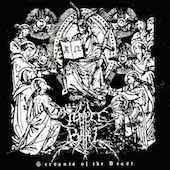 Serving the beast can sometimes taste pretty bland. Temple of Baal’s debut proves that. The diabolic joy of playing dies not shimmer through the music, a too high a number of guitar lines lacks emphasis and a lot of mid-tempo parts prevent both intensity and tension. However, the album starts well with the harsh and atmospharically dense “Backstabber”. Here Temple of Baal show that they are not allergic to dynamic tempo changes and rapid speed. “Tiumphing Blasphemy” has also made a stable pact with the beast. The guitars play simple yet properly constructed lines and a silent break in the middle of the peace provides for an unexpected realignment. The dudes from France do not appear as naive newcomers, they are able to design mature compositions. Unfortunately, they demonstrate this too rarely. Maybe already the length of 31 minutes and the number of tracks (seven) indicate that this release came a little too early.

The song material is one thing and I will come back to it. But first I want to speak about the production. Frankly, it is a bad one. “Servants of the Beast” sounds dull (almost sticky), little developed and it lacks punch. At first, the musicians can compensate for this with their two good pieces at the beginning of the record. But the first tones of “Towards Eternal Death”, a totally boring guitar line, give the album another character. Temple of Baal do not return to form, no matter what they try. The monotonous voice, the muddy-sounding guitars and the undifferentiated drums serve moderately successful songs. An individual note is missing. That’s no problem per se, but the trio performing here cannot make up for this with outstanding musical content. The songs do not trigger many emotions, to express it politely. No, Temple of Baal do not do many obvious mistakes, yet this alone cannot be the standard for a good record. “Servants of the Beast” lacks vital moments, at least after the first two songs and that’s the reason why it drowns in the sea of mediocrity, where everything somehow sounds the same.

Perhaps the Scandinavian role models (Ragnarok, Setherial, not the very famous names) were an influence for the guys from Paris and every now and then a dramatic Celtic Frost touch shines through the notes. Especially “Slaves to the Beast” (why why suddenly even slaves, wouldn't servants have sufficed?) with its “Ugh” and “Hey” during the mid-tempo verse sends greetings to Switzerland. But do not expect the brilliance Warrior and Ain (R.I.P.) once embodied. The trio simply does not manage to get depth into its songs. Given this fact, I arrive at the following conclusion. If you ever get stranded on a desert island where this is the only metal CD: listen to it. Otherwise, well...