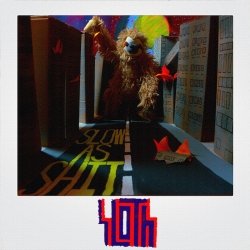 Type: Full-Length
Release Date: September 28th, 2015
Label: Self Released
Genre: Sludge
1 Meditate
2 Green Sunrise
3 Waking Up
4 Call Of The Sloth
5 Nothing But Leaves
6 Awaken That Which Lies Among The Trees
7 Smoke N' Sleep

There’s an undeniable trend in a certain populace of metal lovers where the drone still resides. I have always been on the fence when it came to the buzzing drone of down tuned guitars as being a genre or attribute of the music, as when done well unique textures and resonances develop build wax and wane, and then music gradually seeps in-between the wave peaks. It can be used as an extra color to vary and play with, contrast everything else going on, or use it as the foundation of a path. This always gets on my good side. Poorly executed i want to kill my stereo and burn the CD, or in digital - regret forever the time I just wasted polluting my ears.

Thankfully Sloth’s release Slow As Shit does the former, and with wonderful acumen too. This project has managed to texture the fuck out of stoner rock, and retain the requisite sabbath-isms each step of the way. Sure there’s plenty of resonance and fuzzy grinding distortion, interesting affected guitar mood swings, warm soulful bass when necessary, and plodding drums awash in (what would be sincerely awesome if that was a real) hall reverberance. None of this is overindulgent though, it supports and frames the music, not obviously, but in subtle nuances. The vocals are sparse and they aren’t really contributing very well when they are abundant. The screeches on two tracks that kinda come in and echo away in a scary lost room (bit loud in the mix there buddy). It just doesn’t really fit inside the chasm here. These voyages are just that, I never needed narration for any trip I’ve taken.

My annoyance for this album comes about around track 06 when I hear the drums eating up the melodies with a nasty pumping. And then those vocals come full force… Yeah don’t do that. The drum faux pas I can attribute to a failed experiment, but those black metal rasps aren’t doing anything for your execution here - consider me ripped out of the trip. Then add to it the whole last track which, unfortunately, due to the wank of unnecessary synths that sound extraordinarily in your face and poorly done. I’m going to assume that’s a joke and I’m not going to even try and objectively approach these tracks.

So what you have here is half an album of completely beautiful stoned out tripping. Think Boris’ more exciting vistas slowed down with no vocals and less ‘rock’ appeal, think Red Sparrows or godspeedyoublackemperor with a more psychedelic bend, Pelican but less repetitious, but then none of those will matter once you get enveloped. Then a hackneyed last two tracks invade your listening, and I just tossed this whole affair. I wanted to really promote this entire album, I wanted to tell you this was excellent and something worth your time - but when you disrespect your own art and bastardize it by tacking on crap filler so blatant and ill fated as those tracks, I’m out. Maybe next time, but there has to be more thought behind what you find worthy of tacking on your album. And that cover??? Really??? If the music kicked ass all the way through and ended with track 05, I could oversee it, but now the album just looks like ironic emo scrawl making fun of an art form many hold dear. You get at least credit for trying….. but you killed it with carelessness…. With so many coulda been contenders, I can’t pretend to understand why……