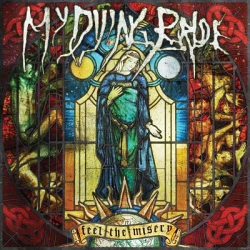 ::   ::
Type: Full-Length
Release Date: September 18th, 2015
Label: Peaceville Records
Genre: Doom
1 And My Father Left Forever
2 To Shiver In Empty Halls
3 A Cold New Curse
4 Feel The Misery
5 A Thorn Of Wisdom
6 I Celebrate Your Skin
7 I Almost Loved You
8 Within A Sleeping Forest
MetalBite on YouTube

They’re back and in fine form. If you aren’t familiar with MDB, you’re quite behind but I’ll give you a quick catch up. Peaceville back in the late 80’s/early 90’s released three bands albums that became the basis for “doom” as we know it. One of those albums was MDB’s Turn Loose The Swans. Back then, MDB provided doom with a more death metal etiquette - down tuned and shot through with low growls over distraught melodies and somber violins and keyboards. Not long there after MDB expanded their melancholy to include goth textures (Angel And The Dark River), and even later dabbling in unexpected synthetic stylings. Finally they tied it all together in the last fifteen years with a truly textured palette of misery and melancholy. Now that’s the vague run down, lets not linger….

Marking a return of their original guitarist Calvin Robertshaw, Feel The Misery pries the plod of past albums back with contrasts of rhythmic attacks. One of the things I’ve always admired about MDB is their ability to bring about rhythm and maintain the down tempo, making material that is exquisitely metal, but also emotionally vibrant with melody. Just as soon as you think you’ve grabbed the tone of the album, the music has a brief excursion to another texture almost seamlessly.

Speaking of textures and melodies, this album definitely provides. The violins weep when necessary, the keys play backup where they should. While less of a key component as in their early albums, they provide the additives to the MDB formula that culminate in familiar drifts and builds. Is it a formula??? Well, yes and no. MDB came up with this recipe in their beginnings - to use these ingredients to bolster their style. Having refined and experimented over the course of their career, they know their palette, and they know how to wield it for a tasteful brew.

The vocals are a style that is ultimately their own. From frail, pained singing to miserable spoken word and whispers contrasted with the most agonizing growls, and never is their a moment you can doubt the sincerity. The mood cannot be denied as the vocals worm their way into your head.

It’s very hard to review appropriately an album from one of the founders of a genre unless it is legacy destroying. There is so much to address - historically and presently. So I’ve tried to mediate between alienating those who aren’t as familiar with MDB, and addressing the concerns of die hard fans. For the fans, picture this album as a collage of Turn Loose The Swans, Angel And The Dark River, Light At The End Of The World, with several nods to rarities like I Am The Bloody Earth. So what I am saying is, you won’t be disappointed, it’s classic MDB. For the newcomers, imagine a bleak landscape of doom that is not constrained by melody, drone, or gothic stylings, but using all these and more to make a dynamic and ultimately uncompromising death doom album. For lovers of the miserable…… Do yourself a favor, get this……..