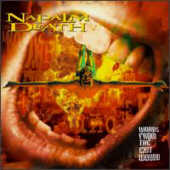 Old Napalm Death is dead, long live old Napalm Death. As much as I like this album, nothing equates to Harmony Corruption or even From Enslavement To Obliteration. The early grind days were great, so was Scum and The Peel Sessions. I mean if you want chronic crazy blast beating with grind/noise, then old Napalm Death is for you. But here, they take on much more of a death metal-oriented style, which isn't bad, just don't expect to hear any of what was featured on the early grind years. There are some blast beating going on, but it's solid musically and they've definitely progressed, but lacked the extremity that was retained on older stuff.

I'd have to say that I was expecting to hear just utter crap on this album, but ND really delivers with the riffs here and keeps you interested the whole way through, even though it is slower. I still think that it ranks good despite what other critics of the band think. I think that this is a really solid put-together and everything seemed to flow fluently on here. No real objections, just the intensity. The music is way slowed down and definitely a more solid production than earlier days. Definitely think that if Mick Harris was still with ND, he'd not let them slow down. But Mick doesn't even play the drums anymore and only owns a pair of drumsticks. If you caught Live Corruption, he said that their musical ability was getting better which it was, but why did he have to leave the band? That really created a lot of turmoil between him and Mitch. I doubt that they even talk anymore. I remember them having a quarrel about a year and a half ago on Facebook. It wasn't pretty. Mick kept them extreme and I think Mitch wanted a more death metal-oriented ND which is what's featured here. Not saying at all that the band members slacked off on their musical performance here. They captivate the listener with pure in your face death metal. I really like this album because it's just different. Somewhat groove oriented with the riffs, not a whole lot of backup screams by Mitch here, and good that Jesse was still alive to keep them doing what they do best--kill on the guitars. There aren't a lot of tremolo picking on the riffs here, there's more chords and fast picking, kind of like some groove thrash. Barney displays a little bit of clean measures here, but really brief. The production quality was really really solid.

No complaints on this one, just don't expect that much fast blasting. Expect a more death metal ND, not grindcore or even death/grind. Just mostly death metal. It's really noteworthy and the music really sticks. Awesome what they were able to produce here. I think Mick was the fastest blaster ever. Those were the glory days, now onto a newer type of ND, something that I thought would never happen, but it did. They put on one helluva live performance though, even with the newer material and Jesse no longer with the band and living period. Expect diversity.