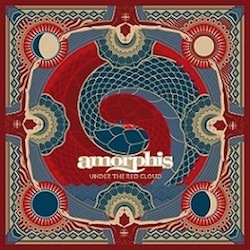 Amorphis returns with what is arguably their finest record with Tomi Joutsen on vocals (although I could still argue that Skyforger holds that title). Upon the initial listen, I was slightly disappointed. The lack of ultra-catchy choruses as found on the first 3 LP's with Joutsen was surprising but not entirely unexpected after Circle. It was not until the 3rd listening session when I began to see the brilliance of this record, despite my initial misgivings.

For one, the use of the growls has increased significantly. Of course, they have been present since Eclipse, but we haven't heard an Amorphis album with these many growls since Tales from the Thousand Lakes. And the growls are simply dominating. Joutsen's mighty, forceful roar is unleashed on every single song aside from 'Sacrifice', and there are even a few songs where the chorus is completely growled. There are times when he holds the roars for a very long time, often over crushingly heavy and wicked riffs, and you are simply blown away by how superb his growling is (perhaps the best I have ever heard). You could also easily argue that this is the bands heaviest record since Tales as well. While songs such as the title track and the aforementioned 'Sacrifice' aren't quite up to the quality of some of the other tracks, they are still very good - there is not a bad song on the record!

Back to my initial dissatisfaction with the choruses: what was revealed after multiple listens was that the band did this on purpose (which I later confirmed through multiple interviews). They were looking for a less poppy sound, and by god they achieved it. How is this record so good without the consistently catchy choruses? By creating compositions that from beginning to end are entirely engrossing, well-written, and create a seamless continuity from song one to song ten. The riffs are so excellent, and the use of flute, female vocals, sitar and many oriental scales so effective, that you begin to realize that the choruses are different, but still very good. On top of that, the choruses on songs like 'Death of a King', 'Sacrifice', 'The Skull', and 'White Night' are actually among their best.

The best songs on the record are: 'The Four Wise Men' (Joutsen only growls on this song, switching between piercing black metal screames and lower growls during the chorus. The main riff is driving mid-tempo melodic death metal, the guitar solo is stunning, and the bridges in the middle/end of the song with the flute is absolutely epic and beautiful), 'Death Of A King' (Often referred to as the Elegy song due it's use of Sitar, but aside from that this songs sounds nothing like an Elegy track. The main riff is crushing with growled vocals, along with some interesting guitar and flute work over the heaviness. The chorus is stunning and catchy), and a trio of songs on the second half of the record. 'Dark Path' has a powerful verse that recalls the old days, with growls flowing over a riff that sounds like it would have fit right on the Tales record. The melody and the keyboards over the driving double bass may cause you to bang your head until injury occurs! 'The Tree of Ages' offers a folky central riff, intertwined with multiple melodic death metal sections (one recalling Iron Maiden) and another stunning solo by Esa.

To top the album off, closer 'White Night' brings the goods. The opening riff (clean guitars) recalls Katatonia circa "The Great Cold Distance", especially when the riff is revisited during the mid-section of the song. The bridges contain a might oriental inspired riff with Joutsen's dominating roar, followed by a chorus that is quite possibly the catchiest and most memorable on the album, if not in years. The only reason I do not give the record a 100 is I would have preferred a few catchier choruses, but do not let that dissuade you. This is in contention for my album of the year (and is currently winning that title), and once this record gets under your skin you may come to see that this is easily in the top 3 Amorphis records of all time. Highly recommended!