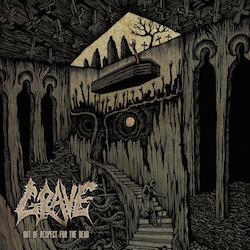 More than 28 years ago, "All your records sound the same", my first girlfriend cried. By the way, she was talking about albums of Kiss, AC/DC, Slayer or Venom. I agree that "I Was Made for Lovin' You" can easily be confused with "Bloodlust", no doubt about it... "All these metalheads are ugly" was another of her often made statements. She was really an expert! Needless to say that I did not marry her.

A few years later, death metal was invented. Due to the fact that my previous drama queen will never visit this site, I confess calmly: sometimes, but only in my darkest hours, I tend to think that all these death metal albums sound the same. The strict concept of the more or less deadlocked sub genre is like a straitjacket. Grave, one of the well known two dinosaurs of Swedish death metal, are aware of this situation. Therefore, they work - as well as their compatriots of Unleashed - on the squaring of the cycle and try to create thrilling albums without hurting the fundamental formula of the deadly handcraft. On their newest effort, the opener makes my day. The intro displays a guitar sound which is low tuned without appearing dull. Instead, the guitars sound barbarous and the entire album shines with a strong and massive production. As soon as the song accelerates the speed, Grave unleash a death metal whirlwind. The track is fast and equipped with the necessary minimum of melodies. Its infectious aura pulls the listener into the album in a matter of minutes. Only the bone-gnawing guitars during the second half of the verses seem to be cut out of some previous albums of the genre. Nevertheless, already this opener proves the right of existence of the lethal metier. Unfortunately, the remaining pieces cannot fully compete with this colossus.

Grave drive through the wasteland of death metal in an experienced manner. Serious deficiencies do not emerge. The well-hung riffs show the band's unbroken brutality and due to the raw yet accentuated lead vocals, the lyrics are surprisingly understandable. An atmosphere of death and despair is created so that no typical genre feature is missing. The Swedish horde embodies the spirit of the musical niche, no more, no less. This means, among other things, that the guys are not really able to rise above the crowd. The guitars tell stories of morbidity and pain and the drummer does not hesitate to smash his drum kit. Songs such as 'Redeemed Through Hate' or 'Deified' will enthuse the community of death, nevertheless: the band reaches its limits. At the latest after their crudest work, the strange and cross-grained Hating Life, Grave have no alternatives anymore. They are doomed to play pure death metal and that's it. The closer, which clocks in after ten minutes, is an ambivalent product of this limitation. While other formations use their monumental tracks in order to create experimental, extraordinary epics, Grave's most extended song is just twice as long as its siblings. But any kind of unusual details is missing.

Nonetheless, the persistent Swedes have written a more than solid album for genre fans. Production-wise, the band knows how to manage a recording session with the effect that the sound fits the bill. The strong artwork, which indicates their deadly style without expressing bloodthirsty fantasies, marks another advantage of the full-length. Aside from this, Grave have accompanied me since their debut or, to say it correctly, I have accompanied the band since then. I bought every album and I saw them in Frankfurt / Main (Germany) on stage on 12 May 1992, together with Demolition Hammer and Massacre. My ears still bleed. Anyway, I will also buy their next output, partly by conviction, partly by habit. I will listen to it and I will be glad that my former girlfriend will be absent.

Short addendum: the limited edition contains the Morbid Ascent EP. I did not buy its vinyl edition and that's why I appreciate this addition very much. The title track stands out, in particular its slightly symphonic ending. But under the bottom line, the EP is no better and no worse than the album.