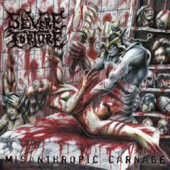 Severe Torture began in 1997, yet the present line-up was only completed two years later when Dennis Schreurs joined forces, handling the vocal parts. After a good effort with their debut album, Severe Torture, a young Dutch band, is hitting us hard with their second full length, "Misanthropic Carnage."

What Severe Torture is doing can only be called one name: death metal! Brutal, super aggressive death metal at its best. Of the nine tracks that "Misanthropic Carnage" is comprised of, only a couple stray a bit, but what you get on this album is mostly a super fast, devastating assault that will probably please all of you people out there crying for more head banging, bloody material.

I know I'll probably get a crowd of madmen to try and crucify or burn me for saying this, but I'm looking for more in my metal. More spice with my meat. You know? Don't get me wrong, these guys are great musicians, no doubt, but perhaps not mature yet and are still looking for their own sound. I have the feeling that I've heard this album before. You know what I mean.

Heavy, fast, grunted deep vocals, good riffs, and acrobatic drumming are all part of the intricate, almost Prog structure compositions. What I like particularly is the top-notch production and I appreciate being able to clearly hear the bass parts which are handled in such a superb way. Some slower passages are included in the best songs, being 'Impelled to Kill' and 'Castrated.' The last one also has a very cool prog rhythmic section in it, much to my hearing pleasure. But I can hardly tell one song from another, unfortunately.

Bottom Line: A pretty good, solid death metal album from a band that still has to find its personality.